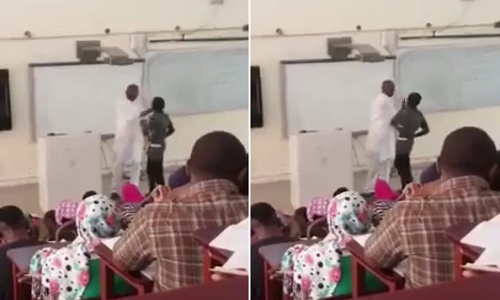 A yet-to-be identified lecturer of the Ibrahim Badamasi Babangida University, Lapai, Niger State, has been caught on camera assaulting one of his students.

In an undated video shared by Jafaar Jafaar on Facebook, the lecturer can be seen apparently asking the male student, whose identity was yet to be ascertained as at the time of publishing this report, some inaudible questions as they both seem to struggle for something in his (student’s) pocket.

The video clip then shows the lecturer landing some slaps on the student’s face before dragging him out of the lecture hall to the consternation of other students, who were watching the drama.

It was not immediately clear what the student’s offence was as the video was not self-explanatory enough but is the lecturer’s action justified?

The IBBU Management is yet to react to the video which is fast becoming viral.