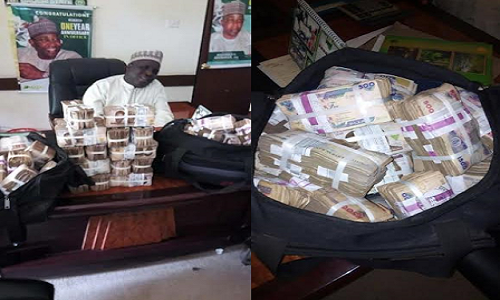 The Bauchi State Government has explained the purpose of viral pictures of stacks of cash said to be about N20 million, placed on the table of a serving Commissioner for Religious Affairs in the state, saying it is not illegal money or has any traces to corruption.
The commissioner, Abdullahi Mohammed Idris, was seen in photos seated behind his table while the large stacks of cash in N1,000 and N500 denominations, were on the table and seemed to be disbursed to some unknown persons.
Explaining the source of the cash and its purpose, Special Adviser to the Bauchi State Governor on Communications, Shamsuddeen Lukman Abubakar, said the money was duly earmarked for feeding during the Ramadan fast.
In a statement issued in Bauchi on Thursday, Abubakar said the money was presented to the people by the commissioner on behalf of Governor Mohammed Abdullahi on Wednesday.
The statement reads in part: It has come to my attention, the circulation of certain photographs online of money found on the table of a serving Commissioner of Bauchi state. I wish to assure you all that the said picture is no implication of corruption or illegal money transactions.
“This period of Ramadan teaches us to extend love to the poor, less privileged and the non-buoyant. In line with this, and as has always been done, the Bauchi State Government releases funds to mosques in Bauchi state for the provision of iftar to faithfuls.
“These funds are disbursed through the Office of the Commissioner for Religious Affairs, to assist faithfuls who are not buoyant enough to afford iftar.
“Once again, we understand the insensitivity of the image, surfacing at a time like this when we as a Government are working hard to achieve a corruption-free and transparent administration.
“We want to assure the good people of Bauchi state that all and sundry is being done to make the best use of resources, fight corruption within the State and ensure that all our promises to the people are fully delivered”.