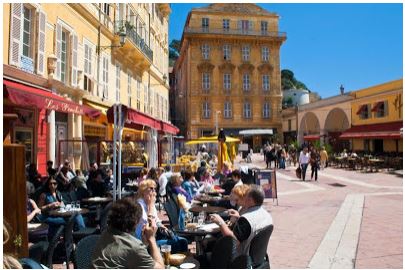 A French waitress was allegedly assaulted by two Muslim men for serving alcohol during Ramadan, The Times report.The woman, a practicing Muslim of Tunisian origin, was working on the terrace of the Vitis Café in Nice when she was insulted by two passers-by on Wednesday. The men are said to have started to abuse her when they saw she was serving alcohol to customers.
She said one of the men screamed she was a “whore” and slapped her across the face, leaving her with a black eye after she was knocked to the ground.
The incident has been seized upon by the far-right as proof of the spread of radical Islam despite attempts to impose secular principles that underpin the French state.
Police said they had identified the men using CCTV but had yet to locate them.
The waitress, who did not give her name for fear of reprisals, said: “One of them said to me in Arabic:
“You should be ashamed of yourself for serving alcohol during Ramadan if I was God I would hang you.”
She replied: “You’re not God and you cannot judge me.” The woman added she felt “degraded, humiliated and sullied” following the incident and noted she had previously served alcohol in Tunisia without any issue.
“I didn’t think that in France, the country of liberty, you could be attacked for that.”