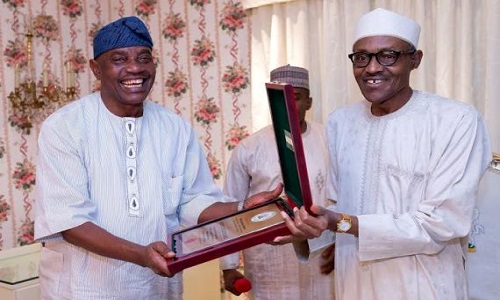 About 24 hours after Solomon Arase retired as the 18th indigenous Inspector-General of Police, President Muhammadu Buhari has explained why he decided to retain the outgone number one cop when he assumed office on May 29, 2015.

Arase was appointed by former President Goodluck Jonathan on April 21, 2015 following the sack of Suleiman Abba over alleged misconduct.

Some few months after he assumed office, President Buhari on July 13, 2015 sacked all the military service chiefs and National Security Adviser he inherited from his predecessor but left Arase to continue in office until Tuesday, when he attained the mandatory retirement age of 60.

Opening up for the first time on what informed his decision to retain the former IGP in office against all odds, the president said Arase’s dossier and his intellectual capacity in the field of operations was enough to convince him to allow the Edo-born graduate of political science to finish his tenure and retire gracefully from the Nigeria Police Force.

President Buhari spoke at the public presentation of a publication “Cascade of Change: A Decade Of Liberal Thoughts” authored by the Lagos State Commissioner for Information and Strategy, Mr. Steve Ayorinde.

Represented by his Special Adviser on Media and Publicity, Mr. Femi Adesina, the president quoted Arase as saying that it was very strange for him to have been invited for a farewell dinner in his honour at the State House, Abuja on Monday, June 20.

Arase said the surprise stemmed from the fact that recent practice has been to be sacked on the pages of Newspapers.

But quoting President Buhari on why he stuck with Arase till the end of his tenure, Adesina said: “When it was the turn of the president to speak, he explained why he kept Arase as IGP.

The presidential spokesman stressed that Buhari appreciates sound mind and intellect, noting that the president said Arase expressed fears that he expected that he would be sacked before the end of his tenure.

“While he (Arase) was speaking at the dinner, he told the president that it was very strange for him to have been invited for a farewell dinner, because, what we know in Nigeria is that, you are sacked on pages of newspapers.

“Arase, also had the fear that, since, he was inherited by Buhari’s administration, he was not sure that he would be retained; so every day, he had the trepidation that he would hear that he had been removed”, Mr. Adesina added.

Speaking at the event, Lagos State Governor, Mr. Akinwunmi Ambode said his administration has succeeded in laying a strong foundation that would propel the State to emerge as a globally competitive City-State, adding that the next line of action was to consolidate on the gains made so far to deliver on first class infrastructure and economic growth.

In his remarks, Chairman of the occasion and former Governor of Ogun State, Aremo Olusegun Osoba, said in the last one year, Governor Ambode has silently embarked on massive transformation of the State.

Osoba, widely acknowledged as a doyen of the journalism profession in Nigeria, also commended the swiftness in which the Lagos governor attends to issue of infrastructural renewal, saying many testimonies abound that Governor Ambode is a silent achiever, adding that such was what governance should be all about.

The public presentation of the book was also witnessed by dignitaries including the Oba of Lagos, HRM Rilwan Akiolu 1, former deputy governors of Lagos State, Otunba Femi Pedro who represented Asiwaju Bola Ahmed Tinubu and Princess Sarah Sosan, representatives of Oyo and Osun State Governors, as well as the crème-de-la crème of various national dailies, including Chairman Editorial Board of The Nation Newspapers, Mr. Sam Omatseye, Editor, The Nation, Mr. Gbenga Omotosho, among others.