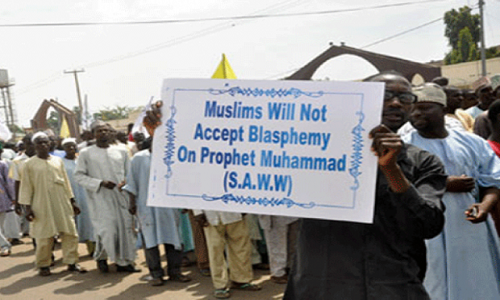 Less than a week after four persons, including a 24-year-old trader were killed in religious violence that broke out in Pandogari, Rafi Local Government Area of Niger State, a woman trader has been beheaded by angry Muslims youths in Kano over allegations that she blasphemed Prophet Muhammad.
The victim, whose identity was not disclosed but said to be of Igbo extraction, was accused of blasphemy during a religious argument at the popular Wambai market on Thursday evening.

The woman, who deals in plastic wares at the local market, was reportedly in company of her husband when she was attacked by the angry youths and beheaded.
But for the intervention of the police, the same fate could have befallen the husband, who witnessed the unfortunate murder of his wife by the youths.
Contacted, the Public Relations Officer of the Kano Police Command, DSP Musa Magaji, confirmed the incident.

He said ” At about 4 30 pm, there was a disagreement between the murdered woman and some traders bordering on religion.

”The woman was said to have blasphemed Prophet Mohammed, which did not go down well with the mob”.