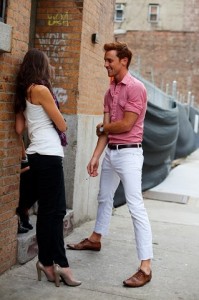 If you’re wondering whether a guy sees himself as serially single or ready to lock it down, here are a few of the telltale signs he’s not ready for the ring:

1. He Can’t Make Big Decisions
His reluctance to marry might not be about you at all. If he can’t decide on, say, what career path he wants to follow or where he wants to live, he probably doesn’t know himself well enough to settle down yet.

2. When He Talks About His Future, He Doesn’t Talk About You
In 10 years he wants to be a CEO. Great. As he’s musing out loud about these plans, does he speculate on how you’ll fit in? .

3 He doesn’t ask about your long-term goals
Again, if he’s not yet tailoring his pipe dreams to yours, he’s not yet thinking about your lives together. It’s not like he has to account for every little detail, but if he isn’t showing an interest in your future, it might be because he doesn’t see himself in it.

4 He Doesn’t Handle Conflicts Well
Relationships require maintenance, and hey, fights happen. But when you get into a spat, does he launch right into a blowout fight or calmly try to explain why something bothers him? Does he talk to you when he’s upset or totally shut down emotionally? If he loses his cool during small disagreements, it’s not a good sign for any of the larger conflicts that may come down the line.

5. He Makes Odd Noises During Romantic Comedies
If it’s just minor eye-rolling during the cheesiest and most cliché-riddled scenes (he stopped the wedding at the altar?! He raced through airport security just to kiss her?!), then don’t read too far into it. But if he’s grunting, growling, and whimpering like he’s in pain for the entire duration of Titanic, he’s sending a message. You’re just not his Rose.

6. He Avoids Your Family
If he doesn’t want to attend your parents’ anniversary party with you, then he probably isn’t thinking of them as his future in-laws.

7. He Won’t Split Any Big Purchases
If he makes a clear declaration of who owns what, then he’s probably not yet feeling that confidence.

8 He Doesn’t Like Your Friends
Accepting you means accepting the people who you surround yourself with. If he can’t bring himself to do that—or at least make an effort—then he’s not ready for a serious commitment.

9 He Downplays Your Relationship in Front of His Guys
Invariably, somebody will make an awkward joke about you being husband and wife, or they’ll ask flat-out when you’re going to get hitched. It’s one thing if he deflects with something harmless (“She’d never be able to put up with my crap”), but it’s another if he takes a firm stance (“No way—we’re a million years from even thinking about it.”). Similarly, if he jokes about breaking up or about the hot other women he wishes he could sleep with—despite the fact that it makes you uncomfortable–then he’s not marriage material.

10. He Criticizes You
He doesn’t like that you wear so much pink? Or that you take days off work to hang out with friends?. If he’s constantly voicing disapproval over the small things, then he’s not ready to take on the big things. You can do better.