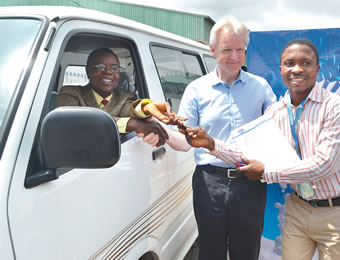 As part of its Corporate Social Responsibility (CSR), FanMilk Plc have donated a new bus to the Federal Cooperative College, Ibadan Oyo State.

The company, which has been in operation in Nigeria since 1963, has been active in giving back to its host communities in Oyo and Lagos states.

The Managing Director, Mr. Hans Pedersen while speaking at the handing over ceremony which took place at the FanMilk factory premises in Eleyele, Ibadan, said: “FanMilk Plc is pleased to be contributing to the development of Eleyele. In 2013, we constructed culverts for the community.”

As an environmentally responsible company, he added, FanMilk Plc is committed to international best practice in waste management.

“FanMilk upgraded its Effluent Treatment Plant (ETP) to international standard. All the liquid waste from operation processes is treated before being discharged,” he said.

The provost of the college, who received the bus on behalf of the school said: “We express our heartfelt joy for the donation of this brand new bus which will be used by the Student Union. We have had a good relationship for some time with FanMilk. Today’s donation marks a milestone. We are truly grateful.”

The Student Union President, Mr. Mosaderin Mutiu Adewale, also corroborated the provost, saying the donation showed the commitment of FanMilk to the college.

In a related development, the manufacturer and marketer of frozen and non-frozen dairy food products has started a pilot project with the Lagos State government to reduce the impact of plastic waste products on the environment.

It also partners with the Lagos State Ministry of Environment on its Climate Change programme, which it has been supporting for the past three years.