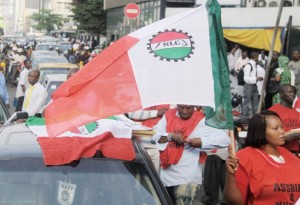 4 workers were allegedly shot in Nasarawa state by police on Friday as the Nigeria Labour Congress (NLC) began talks with the State Government over the labour crisis rocking the state.

The workers were said to have been shot by a policeman at the gate of the Government House where they had gone to await the outcome of the NLC meeting with Gov. Umaru Al-Makura

NLC President Ayuba Wabba told newsmen at the Police Clinic in Lafia that one of the workers had died, while three others, including a lady were being treated for gun shot wounds.

He said the dead victim was a staff of the state Ministry of Education, while the injured included a staff of Doma Local Government Council, the Judicial Service Commission and a journalist.

He told newsmen, “the workers were unarmed and peacefully protesting for their rights only to be shot at by policemen stationed at the government house gate.

“We do not know what prompted them to shoot at unarmed workers who were waiting for us to finish discussion with the state government over the issue of their emoluments.

“They were attacked with maximum force. You can see one dead, two critically injured. They were very peaceful, unfortunately the police, under whatever pretence opened fire. It is most unfortunate,”

He added, “the rules of engagement in such a situation must be adhered to as everybody around the world has a right to protest. These workers have a right under the law.”

He also called on the police authority to arrest those responsible for the shooting or face a nationwide protest.

Commissioner of Police, Abubakar Bello in his reaction to the incident said he was yet to be briefed as he was attending the meeting between NLC and the state government.

He said the command would investigate to find out what really happened.

Wabba appealed to workers to remain calm as the national leadership would take up the issue and will inform them on the next line of action.