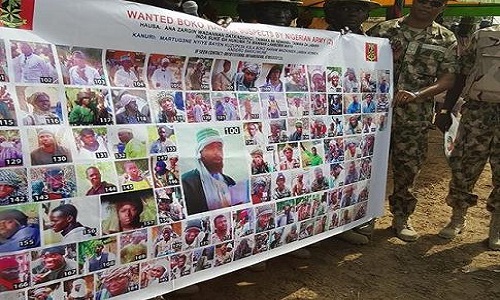 Six of the 100 suspected Boko Haram members declared wanted by the Nigerian Army have been arrested last Friday in Lagos by the vigilantes otherwise called the Civilian Joint Task Force (CJTF).

The Seriki Hausawa in Ijora, Alhaji Mustapha Mohammed, who heads the vigilante group said: Adam was arrested in an abandoned 40-foot container inside a church in Festac Town.

He added that: Ali and Blam were arrested during a raid of suspected terrorists’ hideout at Isheri; Ahmed, Kamsalem and Mohammed were nabbed on Victoria Island, where they were staying with friends.

Mohammed said the suspects have been transferred to Borno State, where they are wanted by the military, adding that they looked unkempt and hungry when they were arrested.

The security man attached to the church was not around then. The container was locked from the outside with a padlock. The pastor of the church was embarrassed to see us, but by the time we explained our mission to him, he along with others stood aside to see and by the time we broke the padlock, Adam was hiding in the far corner of the container. As soon as the pastor sighted the suspect, he started singing praises.”

Mohammed said his group started operation in Lagos in 2011, preventing the terrorists from carrying out their dastardly acts by gathering information and arresting the insurgents and handling them over to the authorities.

He reiterated his group’s commitment to continue to protect Lagos from the Boko Haram menace.

Those arrested in the past by his group, he said, were handed over to the Department of State Services (DSS) in Shangisha, the Assistant Inspector-General of Police (AIG) Zone two or the police commissioner.

“You know we are from Borno State where these people also come from and we know their communities. Our people back home do monitor them, and once they leave Maiduguri, we would be alerted so that we can be on the lookout.

“Once they arrive in any community in Lagos, our members are always on ground to fish them out based on intelligence report and once they are arrested, we hand them over to security agencies for further investigation and prosecution,” he said.