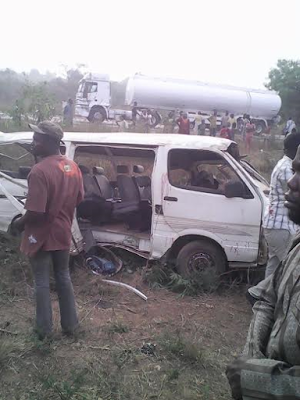 Seven persons have been sent to their early graves in a ghastly road transport accident along Bauchi to Darazo road, involving a bus conveying students of Federal Government Girls College, Bauchi, and two other vehicles, on Monday.

A correspondent of the News Agency of Nigeria (NAN) who visited the scene of the accident, reported that, 17 of students survived the accident.

Some of the students who spoke but did not want their names mentioned, said six of their colleagues who had minor injuries had been taken to the hospital in Bauchi, they added that they were indigenes of Borno and were traveling to Maiduguri as the school had closed for the long vacation.

The bus driver, Malam Dayyab Tahir, in his account said, a car coming from the opposite direction in high speed, veered off its lane and collided head-on with another car moving ahead of his bus.

He explained that the casualty on the part of the students would have been very high if he hadn’t quickly apply the automatic brake which reduced the impact when his bus also rammed on the two vehicles,

Public Relations Officer of the Federal Road Safety Corps (FRSC) in Bauchi, Mr Rilwan Suleiman, who confirmed the incident said the accident was as a result of dangerous driving and high speed by one of the cars involved.

He said that of the 33 passengers in the three vehicles, seven died and nine were injured.