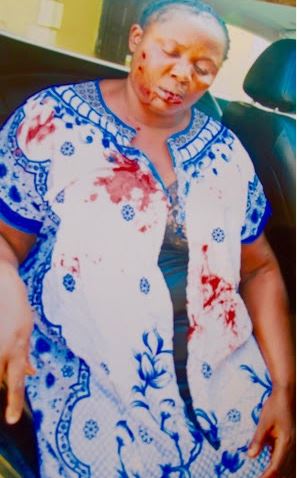 A popular political thug in Akure, the Ondo State Capital, Mr. Adeleye Fayehun (aka Ade-Basket) has been arrested by police for allegedly assaulting a 44 year-old pregnant woman, Mrs. Adenike Adeolu.

Fayehun, who is also into timber business was said to have beaten the woman to a coma over timber transaction business.

The Police Public Relations Officer (PPRO),Femi Joseph who confirmed the arrest said the suspect, Fayehun, had been placed under custody for interrogation.

Joseph added that the confessional statement of the suspect had been taken by the police.

He said “The case has been reported and we have already begun investigation into the matter”.

DAILY POST gathered that the husband of the victim, Olusanya Adeolu, accompanied by sympathizers reported the case to the police at the Akure Area Command shortly after the incident.

Adeolu said the suspect’ Ade-basket’ joined by some hoodlums believed to be his boys battered her wife to a state of comma.

Adeolu alleged that the culprit had been terrorising residents of Akure and had been threatening to deal with his wife over timber business, which according to him he wanted to monopolize.

He said ”the issue got to this level when the suspect (Fayehun) collected a sum of N800,000 from some forest agents which was illegal.

“It was this collection that warranted the timber’s union meeting summoned at a hotel along Ondo road and my wife decided to join them during the session, being a member of the union.”

Speaking on her sick bed, Mrs. Adeolu narrated how Fayehun stood up during the meeting after raising issues and slapped her.

According to her, two other men who were his accomplices also joined to maltreat her, to a point that she became unconscious.

Share
Facebook
Twitter
WhatsApp
Previous articlePublic Fight Between 2 Prostitutes Gets Nasty and Bloody [PHOTOS]
Next article7 Signs He’s Not Physically Attracted To You Anymore
- Advertisement -Ad ==> Discover how a young Nigerian graduate now makes a consistent 40k per week doing a legitimate online business. You too can start yours now, click here!!!