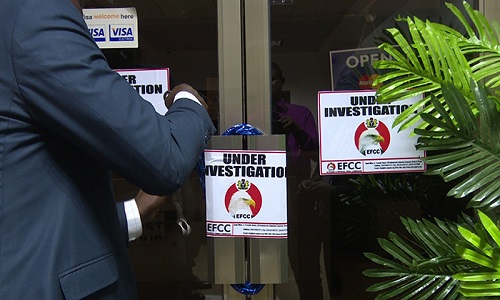 A Dubai-based real estate firm, The First Group, has denied claims by officials of the Economic and Financial Crimes Commission, EFCC, that it was engaged in a dubious real estate scam in which innocent Nigerians were swindled of their hard-earn money to the of $200 billion.

In a statement on Friday, the company described the allegations as “baseless”.

Officials of the EFCC on Wednesday sealed the offices of TFG Real Estate, the Nigerian agent of The First Group, situated on the seventh-floor of the Bank of Industry building in the Central Business District, Abuja.

The anti-graft agency moved against the real estate firm following several complaints that its operations were phony.

Officials of the commission revealed that the company, originally known as TFG Real Estate Limited, operates in Nigerian in the guise of being the Dubai-based The First Group Company, which is not registered in Nigeria.

EFCC sources disclosed that the modus operandi of the company was to lure innocent Nigerians interested in owning properties in Dubai, into parting with their hard-earned money.

A source said such unsuspecting Nigerians are mandated to make the payments in installments, which are deliberately structured in a way that the debt is difficult to offset, and as soon as one defaults, the company “seizes” the money.

In its reaction, The First Group said TFG Real Estate Limited was its Nigerian agent which “fully abides by Nigeria’s anti-money laundering regulations”,

“In line with this commitment, TFG Real Estate, Limited, regularly files the required reports with the section of the Special Control Unit on Money Laundering (SCUML) division of the EFCC in Abuja”, the company said.

“Furthermore, The First Group’s Dubai operations, which are indirectly implicated in these baseless allegations, are governed by UAE Federal Law, and in particular, the country’s anti-money laundering laws, which rank among the world’s most robust”.

The statement pointed out the company’s clients are also protected by the Dubai government’s “rigorous and world-class” real estate regulations, designed to protect the interests of local and international investors in the property market.

“The First Group is fully transparent in its operations and has a proven track-record of delivering world-class developments in the United Arab Emirates over many years.

“Its priority is protecting the interests of its clients and generating strong returns on their investments while complying with all legal statutes in the markets in which it operates”, it said.