Ambode Has Made Me Very Proud -Tinubu 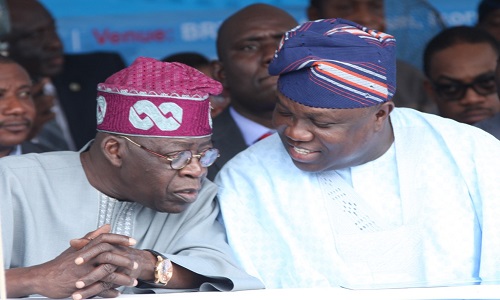 National leader of the All Progressives Congress (APC) Senator Bola Ahmed Tinubu, yesterday showered encomiums on Governor Akinwunmi Ambode of Lagos State, saying that the governor has made him proud.

Tinubu also commended the Deputy Governor, Dr Idiat Oluranti Adebule and the entire team of the state government for supporting Ambode to achieve so much within a short time since assuming office.

The ex-governor made the remark at APC secretariat in Lagos, where Governor Ambode met with local government and ward chairmen of the party.

“I was with President Muhammadu Buhari for about two hours yesterday (Thursday) and Governor Ambode was not there when we were discussing generally about the problem of Nigeria. The Vice President, Professor Yemi Osinbajo got up and spoke glowingly of the Governor and my head was swelling. I became even more proud of him”, he said.

The governor in a statement signed by his Chief Press Secretary, Habib Haruna, appreciated Tinubu’s compliment and equally thanked party leaders and members of the party for supporting him so far, adding that the support he enjoyed had contributed to the successes recorded by his administration.

Gov. Ambode enjoined them to remain committed and loyal to the ideals of the party as well as the leadership of the party.

The newly sworn-in governor of Imo state, Hope Uzodinma has cried out that the Peoples Democratic Party(PDP) is secretly planning to incite the state's...
Read more

Deputy Speaker of Imo State House of Assembly, Okey Onyekanma, has tendered his resignation letter. According to reports, the legislator's letter of resignation was read...
Read more

The Supreme Court has on Tuesday affirmed the victory of Ahmadu Fintiri as the elected governor of Adamawa State. The All Progressives Congress (APC) and...
Read more

Nine lawmakers of the Imo state House of Assembly have decamped to the All Progressives Congress, APC, following Hope Uzodinma's election victory at the...
Read more
- Advertisement -