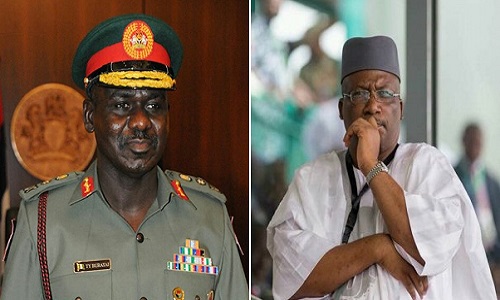 The group spoke against the backdrop of President Muhammadu Buhari’s order for the probe of two former Chiefs of Army Staff, Lt.-Gen. Azubuike Ihejirika and Lt. -Gen. Kenneth Minimah, and 52 others, over arms procurement scandal.

Afenifere said the non-inclusion of Dambazau and Buratai gave an impression that the Buhari administration’s war sectional.

The Publicity Secretary of Afenifere, Mr. Yinka Odumakin, said the duo should be investigated

“If there are allegations against Buratai and Dambazau, they should be investigated alongside their colleagues so that the impression is not created that we have unequal justice”, Odumakin said yesterday.

Also, a Second Republic member of the House of Representatives and convener of the Coalition of Northern Politicians, Academics, Professionals and Businessmen, Dr. Junaid Mohammed, has said that the minister and Army chief cannot be exempted from the arms purchase probe.

According to him, “I still believe that it will be gross injustice for Danbazau and Buratai to be left out of the list of those to be probed”.