The Gunners are said to be upping their summer recruitment drive as they hunt for a new man to lead the line at the Emirates, with reports claiming that Arsene Wenger has now held talks with two top European strikers.

The Sun report that the Gunners boss has been in contact with Lyon’s French striker Alexandre Lacazette, as well as number one striking target Romelu Lukaku of Belgium and Everton as he looks to fill the hole left by Jamie Vardy rejecting a switch to London. 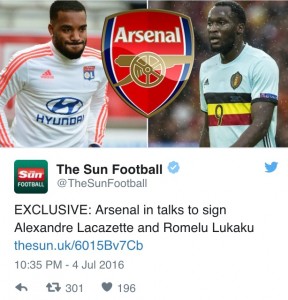 An Arsenal source told the Sun: “Arsene is keen to get a new striker in as soon as possible, but won’t rush anything and overspend.

Last week, Wenger held talks with both the players’ representatives, as well as their clubs, it’s understood that Lacazette is considered a backup transfer option if Everton can’t be convinced to sell up on Lukaku. However, the newspaper claim that the Toffees could disregard their £65m valuation of the 23-year-old to let him go for as little as £40m.