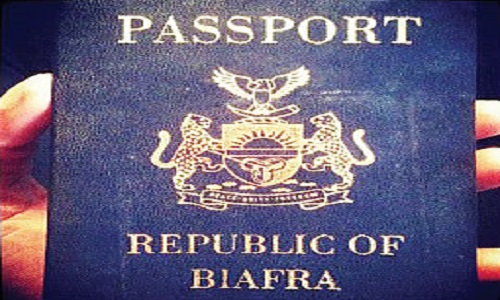 While this author does not subscribe to the speculation, especially in official circles, that the calls for an independent state of Biafra as currently championed by the Indigenous People of Biafra and Movement for the Actualization of Sovereign State of Biafra is politically-motivated, he believes that these groups agitation for self-rule was not well thought out and will explain why in the next few paragraphs.

Since 1999, when Nigeria returned to Democratic system of governance, prominent Igbo sons and daughters have held very influential and high positions within government ranging from Senate President, Secretary to Government of the Federation, Governor of the Central Bank of Nigeria, Minister of Finance, Justice, Aviation, Labour/Employment as well as Chief of Army Staff and National Chairman of the then ruling party – Peoples Democratic Party (PDP). Likewise, most governors of the South East states were of the same party with the government at the Centre (PDP) and one or two of them in each Republic, were believed to have had the ears of the President.

The point is; with its vantage position in different governments since 1999, what did the Igbo politicians/technocrats do to attract much-needed federal government presence to the Southeast region? It could be argued that those blaming President Muhammadu Buhari of marginalization today, and justifiably so, did next to nothing when they had the golden opportunity to use their closeness to the corridors of power to help their people and indeed, the region.

Will a new and independent Republic of Biafra translate to a new thinking among these set of experienced politicians, who over the years have mastered the art of deception and lip-service to their people? Will an Nnamdi Kalu, assuming as President of Republic of Biafra, be able to stand against the financial war chest and political sagacity of the likes of Orji Uzor Kalu, Rochas Okorocha, Arthur Nzeribe, The Uba brothers, Prince Arthur Eze, Among others? There’s no way these caliber of politicians and their ilk will sit back and watch a “small boy” dictate the affairs of their “own fatherland” to them.

Forget what anybody says, even the bible confirms that “money answers all things”. The “change” we’re currently experiencing was made partly possible by the availability of money.

Buhari might have been a “poor man” but the money bags that rallied behind him in 2015, coupled with the massive campaign drive for public donations, played a huge role in his victory.

In Zaria, Kaduna State where this author writes from, at least 90 per cent of the electronics, car spare parts, gas retail, boutiques and cosmetics/patent medicine stores popularly called “Chemists” businesses, are owned/controlled by the Igbos. The story is almost the same in major cities, towns and villages across Nigeria.

It’s estimated that the properties/investment of genuine Igbo businessmen and women in the North alone is worth tens and possibly hundreds of billions of naira. Let’s not even talk about the Southwest, Lagos in particular. Have those agitating for Biafra and in the process beating the war drums put these categories of their kinsmen into consideration? What becomes of their investments in the event of the outbreak of a war (God forbid)?

Hypothetically, will an Emeka, who owns the largest spare parts market and controls the market share in say Kaduna, willingly agree to a relocation to the Southeast where an Nnamdi, Okafor, Uchenna and co are already established and have solidified their holds on the markets there? With his business flourishing and bringing in so much money than he can envisage and with government commitment to security, will a rational-thinking and business-oriented Emeka stay put in Kaduna or relocate to go and start all over because he wants to be seen as supporting Biafra? Worst case scenario, he will hold his Biafra passport and live/do his business in the North, still contributing to its economy and development. Does that defeat the idea of the agitators of Biafra or not? Your guess is as good as mine.

Although the Igbos largely control Nigeria’s multi-billion dollar film industry popularly known as “Nollywood”, this is so because of the platform a larger Nigerian market offers. The technology, the audience and even locations for filming (except it is a comic script), are mostly domiciled outside the Southeast. Have the Biafran agitators also considered the huge negative (fewer positives) impact of their agenda on this yet-to-be fully tapped industry if they succeed in breaking away? Do they’ve any plans in place to accommodate and ensure the continued success of this industry?

Almost the same thing can be said for the music industry except for the fact that it’s not “controlled” by the Igbos.  Local and multinational companies that have artistes and actors/actresses as brand ambassadors are mostly domiciled outside the Southeast or have their corporate headquarters outside the region. Question is would such companies pay a Kobo, not to talk of millions, if the artistes or actors/actresses they want to use as brand ambassadors for a larger Nigerian market, are “Biafrans”, not Nigerians?

The hypocrisy of those agitating for Biafra today was exposed when the late warlord and Ikemba Nnewi, Dim Chukwuemeka Odumegwu Ojukwu ran for President of Nigeria on the platform of the All Progressive Grand Alliance (APGA) in 2003 and in 2007. The Ndigbo hero scored 1,297,445 and a paltry 155, 947 votes representing 3.29% and 0.44% of total valid votes cast respectively. Twice, he ran for the highest office in the land and on the same number of occasions, his own people could not rally behind him.

Truth is, the Igbos have since after the civil war, never been really united with one voice as they have proven to be their own worst enemy.

And try hard as they may to deny it, an independent state of Biafra will never make them more united or focused than they already are. This is so because the Igbos of today lack one true, genuine and principled leader in the mold of Nnamdi Azikiwe or Ojukwu that they can look up to for inspiration, hope and direction. There are many pretenders to the title of “leader” in the Southeast today, but that’s as far as it goes.

It is this writer’s opinion, to which everyone is entitled to agree or disagree, that blaming the “Fulani man from Daura” or the “Yoruba slaves” of the Southwest for the perceived marginalization of the Southeast in today’s political settings, will do more harm, than good to the future political aspirations of the Igbo ethnic group in Nigeria. What the Igbos need to do is build bridges of friendship across ethnic and religious divides, not attempt to burn the ones already built by their forebearers.

While no rational person will ignore the fact that in Nigeria today, one, if not the most underdeveloped and marginalized region in the country is the Southeast, it is foolhardy to expect that all the problems of the region will go-away, as if magically, in the twinkle of an eye if they break away. Ask the people of South Sudan, who thought demanding and getting their own independence from the predominantly Muslim North, was the end of their problem. The world’s newest country is still battling to overcome the teething problems of its new found status.

If only our Igbo brothers and sisters would listen to the voice of wisdom and channel all the energy they are dissipating on secession, towards building a better Nigeria and demanding rightfully and peacefully, their place as one of the tripod legs that make Nigeria stands today.

We can argue back and forth about the advantages/disadvantages of a Biafran secession, but the truth is we are better off together as one; in a country where as the national anthem says “… bound in freedom, peace and unity”.