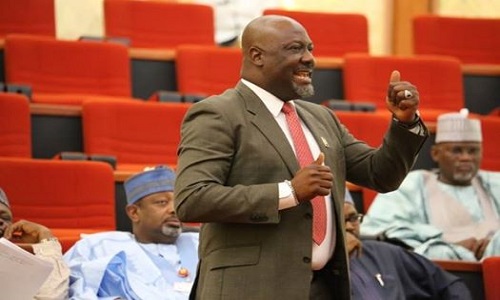 The #BringBackOurGirls group, Lagos State chapter, has berated Senator Dino Melaye for threatening to “beat up” the senator representing Lagos Central District, Oluremi Tinubu, during a heated debate in an executive session held by the senators on Tuesday.

“While the issues of the senate and their disagreements remain strictly their issue, it is pertinent to put an end to this recurring act of threat of violence against women”, the group said in the statement also signed by Yemi Adamolekun, Abiola Akiyode-Afolabi, Ngozi Iwere, Olalere Babasola, and Adwoa Edun.

“It is further disheartening that there is no indication to suggest that the leadership of the Senate has referred this weighty allegation for investigation by its Committee on Ethics and Privileges”.

According to the #BringBackOurGirls group, the Kogi senator’s actions are a reminder of the dark ages, calling on National Assembly to stop tolerating “misogynists” like Mr. Melaye in their ranks.

“With the likes of Senator Dino Melaye in the Nigerian Senate, the Gender and Equal Opportunity Bill which we are campaigning for might never see the light of day”, the group said.

“How can we encourage women to take elective positions without fear when the senate, which has only seven (7) female members out of the 109 members, has men like Senator Dino Melaye threatening the few that have dared the odds to get into politics?

“How can we put an end to violence against girls and women when those who lead/make these laws are guilty of the same acts? Are there no rules and code of conduct in The Senate? Are there no penalties for irresponsible behavior?

“Our future and that of our children depend on the actions we take now and we must put an end to this recurring act of violence, abuse and threats”.

The group noted that with the Lagos #BringBackOurGirls group being members of the constituency represented by Mrs. Tinubu, a former first lady of Lagos, they are calling for an action against Melaye.

“The Nigerian Senate should not aid and abet him this time,” they said.

“If we, as BBOG Group, are asking the State to protect our girls, then such statements in our hallowed chambers should most definitely be strongly condemned and properly dealt with”.