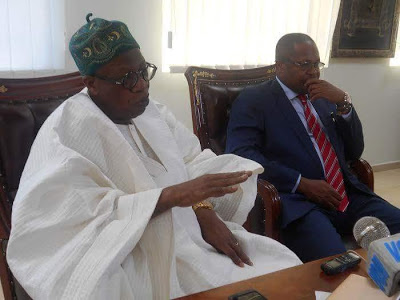 The Minister of Information and Culture, Alhaji Lai Mohammed, has said that President Mohammadu Buhari has fulfilled his campaign promises to address insecurity, fix the economy and fight corruption.

Alhaji Mohammed who stated this at a meeting with the members of staff of the Nigerian Embassy in Madrid, Spain noted that President Buhari-led administration is on the right track and there is no alternative to what it is doing to reposition the nations economy.

The meeting was on the sideline of the Minister’s two-day official visit to the United Nations World Tourism Organisation (UNWTO).

“The federal government had fulfilled its campaign promises to address insecurity, fix the economy and fight corruption.

“I believe that we are on the right track, there will be some pains, but there is no alternative to what we are doing”, he said

On the current effort by the federal government to fight corruption, Alhaji Mohammed said that no amount of economic reforms put in place could work in the country unless the “monster of corruption is successfully dealt with”.

Alhaji Mohammed however clarified that the current administration’s fight against corruption was not selective, and that the government was not probing the 2015 elections campaign funds of the People’s Democratic Party.

He assured that that the government would continue to remain focus in its efforts to rebuild the country.

In the area of security, the minister said that when Buhari came on board, 14 of the 20 Local Government Areas of Borno, four in Adamawa and three in Yobe were under the sovereign authority of Boko Haram but, with proactive measures and soft diplomacy with neighbouring African countries, the US, France and the G-8 had helped the country to “decisively deal with Book Haram”.

“Today, all the major highways leading to Maiduguri are opened and about two months ago, the Nigeria Football Federation (NFF) played a league match in Maiduguri stadium”, he said.

On the renewed agitations in the Niger-Delta region and parts of the South-East, the minister reassured that the government would not marginalise any part of the country, and assured that economic development would go round to everyone.

According to the Minister, the present administration is implementing fiscal discipline and other measures to address the messed up economy it inherited from its predecessors.

He said with the temporarily painful measures, the government would turn around the adversity to gains and ensure that never again would the nation run a corrupt, clueless and an oil-dependent economy.

The Minister said that the administration had been unfairly accused of placing too much emphasis on the fight against corruption at the expense of addressing fundamental economic issues.

The Minister Consular of the embassy, Mr Sola Akinlude, who conducted the minister round the embassy, said that the official population of Nigerians resident in Spain was about 100,000.