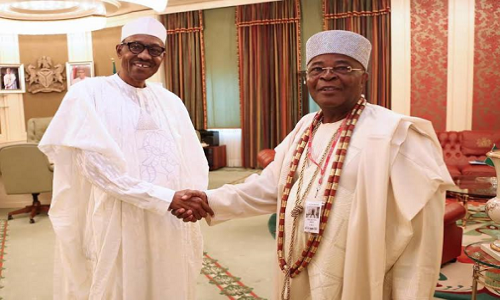 President Muhammadu Buhari Thursday met separately behind closed-doors with the Alake of Egbaland, Oba Adedotun Gbadebo III, and former Speaker of the House of Representatives, Alhaji Ghali Na’Abba at the Presidential Villa, Abuja.

First to have audience with the president inside his office for less than an hour was the monarch, but no official statement was made as to the agenda of the meeting

Oba Gbadebo attended the meeting alone, accompanied to the president’s office by the protocol officers in the State House.

When he was accosted by State House correspondents as he departed the presidential villa, the monarch declined making any comments.

At about noon, President Buhari also granted audience to Na’Abba.

Like the monarch, he was also escorted to the meeting, which held behind closed doors by the protocol officers.

No official statement was issued on why the former Speaker met privately with the president.

Buhari also met with a retired Justice of the Supreme Court, Justice George Oguntade, in his office.