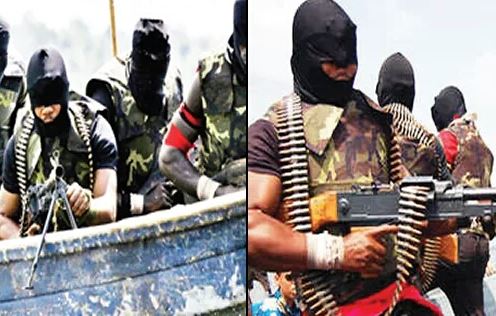 Days after his acclaimed meeting with the militant group, Niger Delta Avengers (NDA), Sports and Youth Development Minister, Mr. Solomon Dalung, appears to have run into trouble as President Muhammadu Buhari has ordered the probe of circumstances surrounding the parley.

“Mr. President has ordered that the minister provides an answer as to whether or not he actually met with Avengers, and if truly he did, he wants to know from him who authorised the meeting,” a presidential aide told our correspondent.

This development came, as it emerged that one Jude Tabai, the son of a retired justice of the Supreme Court, facilitated Dalung’s trip to Oporoza.

But the minister did not disclose his identity to the host community during his visit as he introduced himself as the head of a non-governmental organisation (NGO) working for development in the Niger Delta.

The duo of the minister and Jude went without any security escort, a local source said. On Monday, the Sports Minister claimed to have met with the leadership of the militant group as well as community leaders in Oporoza, Gbaramatu Kingdom of Warri South West Local Government area of Delta State. But the source, who spoke on the heels of the NDA’s and Oporoza community’s denial of any meeting with Dalung, disclosed that the president has directed the National Security Adviser (NSA), Major General Mohammed Monguno (rtd) to “get to the root of the meeting.

“The first question Mr. President raised on the report that the minister visited the leadership of the Avengers and Oporoza community was, who authorised the visit? The question became necessary because neither the NSA nor the petroleum minister or even the military task force was aware of the minister’s trip to the area.

”One thing again is the fact that anything could have happened. And again, it raises the question that if government now knows who the leaders of the Avengers are, then what next? “Mr. President is unhappy over this and he directed the NSA to get to the root of the said meeting because it became more embarrassing when both the Avengers and the community are denying that they met with the minister,” the source told New Telegraph.

A community leader from Oporoza, Mr. Ekilegha Elvis, said the only person who visited the community was the head of an NGO who came with Jude Tabai to meet a few youths. ”They said the man was an NGO man, he only met with some youths who were playing football, interacted with them and left without even seeing the traditional ruler,” he said.

Meanwhile, the Oporoza community has dissociated itself from the purported meeting between the sports minister and the community. The community, in a statement raised the alarm that the claim was an attempt to link Oporoza with the Avengers.

“Our attention has been drawn to a statement by the minister of youth and sports as contained in the newspapers, that he paid a visit to the traditional headquarters of Gbaramatu Kingdom, Oporoza town to have interactive session with members of the Niger Delta Avengers and community people.

“It is pertinent to state that, to the best of our knowledge, we the leadership of the community did not receive the minister of youth and sports, or any other government official in Oporoza town last week. We have stated in many fora and occasions that we do not know anything about the Niger Delta Avengers.

“Oporoza town or any other community in Gbaramatu Kingdom has nothing to do with the Avengers and their activities. We have, in time past, condemned the activities of the Avengers, therefore could not have anything to do with them in our community,” the statement, signed by Mr. Johnbull Demebi, said. The community added that the minister should know that he has been deceived by mischievous persons and perhaps must have been swindled.

The community stated that: “As peace loving and law abiding citizens of Nigeria, we make bold to say that we are very receptive people, and have received several top government functionaries in our community, Oporoza.

For the avoidance of doubt, the last government visitor to Oporoza community was the acting Inspector General of Police, Mr. Ibrahim Idris, and he was given a rousing welcome by the community, led by the chairman, Mr. Johnbull Demebi. And so, we doubt the claim of the Hon. Minister that he visited Oporoza community last week and had a meeting with members of Niger Delta Avengers and other community people.

“At this juncture, we wish to warn and advice government functionaries and Very Important Persons (VIPs) to be careful and mindful of persons they associate with, particularly with the intention of visiting our communities, as some persons are out there to make money from top government functionaries and bring the name of the community to disrepute.

“And so, whoever, wants to visit our communities should make proper arrangement with the leadership of such communities so as to avoid any mishap in the course of embarking on such journey.”

Dalung, who spoke to some journalists at the end of a stakeholders’ meeting of the southern senatorial zone of Plateau State in Shendam, said he took a two-hour journey on the sea to Oporoza in Gbaramatu Kingdom where he met with the leadership of the NDA who gave him a sealed hand-written letter to deliver to President Muhammadu Buhari.

He said: “On reaching the community after the two-hour journey on the high sea, I met with the members of the communities who told me that their dream was to be included in the Nigerian project, that the education facilities and other basic social amenities are almost nonexistent in the communities.

They also raised concern of incessant attacks by the Nigerian military. “As a youth minister, I know that the Avengers are mostly youths who have potential to be great citizens of this country,” he had said.

Dalung stated that after meeting with the communities, he was escorted by the Niger Delta ambassadors to the leadership of Avengers who gave him a hand-written letter specifying their demands which, he said, he was yet to present to the president. Although the minister said he did not unseal the letter, he said the Avengers had raised three important issues to him.

“The issues include the Niger Delta Maritime University, pipeline community policing, which, they said, government had denied them and the inability of government to continue with the amnesty programme established by former President Umaru Musa Yar’Adua,” he had said.