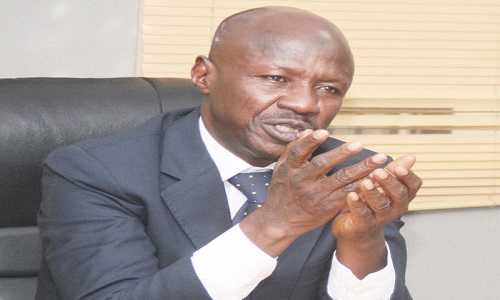 There were reports yesterday that president Muhammadu Buhari has written a letter of recommendation to the senate to confirm the acting chairman of the Economic and Financial Crimes Commission (EFCC), Mr. Ibrahim Magu as the substantive boss of the agency.

It was gathered that the President opted for Magu because of his “record-breaking performance, transparency, integrity and exceptional courage” since his appointment as the acting chairman of EFCC on November 9, 2015.

The letter was said to be forwarded to the Senate through his Special Assistant to the President on National Assembly Matters, Senator Ita Enang.

His nomination was said to be in line with Section 2(1) (a) of the EFCC Act, which reads in part: “The commission shall consist of the following members – (a) a chairman who shall (i) be the Chief Executive and Accounting Officer of the commission; (ii) be a serving or retired member of any government security or law enforcement agency not below the rank of Assistant Commissioner of Police or equivalent; and (iii) possess not less than 15 years cognate experience.”

When contacted, Enang was not forthcoming on the President’s letter.