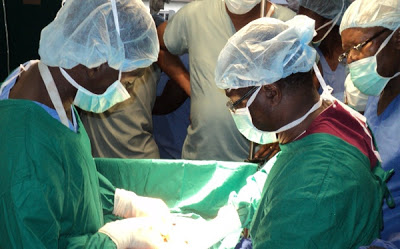 A new bladder has been constructed by a team of Nigerian surgeons at the Abubakar Tafawa Balewa University Teaching Hospital, Bauchi, for an 18-year-old cancer patient.

The recipient of the new bladder, Saidu Ibrahim, a student of Abubakar Tafawa Balewa University, Bauchi, was diagnosed of having malignant cells in the tissues of his bladder.

Surgeons at the university hospital put their heads together to carry out the procedure that led to the removal of the bladder, and constructed a new bladder (neo-bladder reconstruction) to save Mr. Ibrahim’s life.

The team, which included Dr. Makama Salihu, the head of surgery, ATBUTH Bauchi, was led by Haruna Liman.

Speaking with PREMIUM TIMES on the medical feat, Dr. Liman said that the patient had a five-year history of passing blood in his urine as a result of the cancer of the bladder.

“When we evaluated Ibrahim, we discovered that he had a mass in the bladder, so he had to go through various screening such as intravenous pyelogram, (series of x-rays of the kidney, ureters and bladder), biopsy (removal of cell tissues so that they can be viewed under the microscope by a pathologist), and Cystoscopy, which is a diagnostic procedure where a hollow lighted tube is used to look inside the bladder”, he said.

“All these procedures were conducted to establish whether there were cancerous cells or not ‎in his situation, the aim was to control the tumour from spreading because there was a spread of the tumour into the pipes that link urine between the kidney and bladder”.

“The aim of this procedure is to give him the best option because there is no cure for cancer. What we did for him was to control the tumour from spreading and increase his chance of survival and that we have achieved so far. The second part of the procedure was to remove the bladder and refashion a new bladder for him”, the surgeon added.