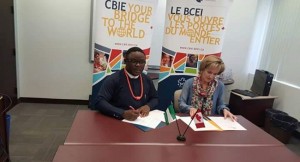 The Cross River State Government in conjunction with the Canadian Government have concluded plans to build Canadian international school that will provide learning facilities for primary, secondary and a tertiary institution in the state capital.

Governor Ben Ayade revealed this to newsmen at the Margaret Ekpo International Airport upon his arrival from abroad to acquire practical knowledge on how the state can develop in some sectors.

The governor said the state decided to partner Canada due to the fact that the country is rated the best in terms of education in the world as he added that his administration would stop at nothing in achieving a sound educational system which will in turn birth new study system that will encourage learning in schools as practiced in developed countries.

A builder’s school will also be built in the state to encourage local talents gain international recognition as the state sets to build new cities, governor Ayade added.

In June 2016, the Canadian Bureau for International Education (CBIE) and the Cross River State Government had signed a Memorandum of Understanding (MoU) on education in Ottawa, Canada.

The MoU signing came barely 24 hours after the Canadian Government and Cross River State concluded a deal on trade and investment.