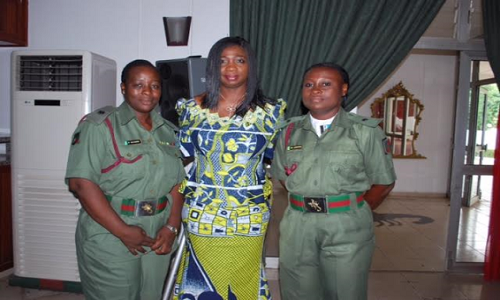 The Senior Special Assistant to the President on Foreign Affairs and Diaspora, Abike Dabiri-Erewa, has advised women soldiers to be proficient in the act of public speaking.

She gave the advice in Abuja during the maiden edition of Guards Brigade female soldier short talk competition on Tuesday.

Mrs. Dabiri-Erewa, who was the Special Guest of Honour at the occasion, said: “In this modern time, the act of public speaking is very important in every aspect of life”.

The SSA, a former award-winning television presenter and journalist of repute, said the most effective way to communicate is speech, while the four language skills of listening, speaking, reading and writing, are all interconnected.

“Proficiency in each skill is therefore necessary to become a well-rounded communicator”, she added.

She pointed out that the capacity to put words together in a meaningful way to reflect thoughts, opinions and feeling provides the female soldiers with important advantages.

Mrs Dabiri-Erewa assured the participants that the training would enrich their level of professionalism and make them more responsive in the discharge of their duties.

She said: “I am delighted that Guards Brigade in particular and the Nigeria Army in general is making encouraging efforts to extensively train their personnel in the act of public speaking.

“You must remain resolute in this regard.

“We will continue to reach out to our country men and women in Diaspora to intimate them with the good work and sacrifice the Nigeria Army is making to keep our fatherland safe and habitable”.

Earlier, the Commander of the Guards Brigade, Brigadier General Musa Yusuf, said the programme was part of the series of training activities for Guards Brigade female soldiers to correct detrimental effects of poor communication among the personnel.

Highlights of the event included an inspection of guards by the Special Guest of Honour and a short talk presentation and competition amongst teams from different units of the Army.