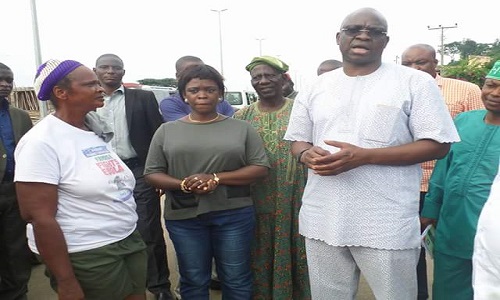 A rights activist and lawyer, Morakinyo Ogele, has advised Governor Ayodele Fayose of Ekiti State to resign from office or be chased out of the Government House by the people, whose resources he claimed, have been mismanaged by the governor in the last two years of his administration.

Ogele, who spoke with reporters in a telephone chat yesterday from Ado-Ekiti, the state capital, warned the governor against blackmailing prominent Lagos lawyer, Femi Falana (SAN) as being behind his latest face-off with the Economic and Financial Crimes Commission (EFCC).

He stressed that Fayose was no longer “fit and proper” to continue to occupy his seat as the governor following revelations of alleged purchase of property within and outside the country with public funds.

The National Coordinator of Ekiti Redemption Group (ERG) regretted that Ekiti was again in the news for the wrong reasons over the alleged involvement of its governor in the sharing of arms deal cash.

“I want to warn Fayose to leave Femi Falana out of his problems, he should stop saying Falana is the one trying to remove him.

“Fayose should tell the world whether it was Falana that encouraged him to be involved in unprecedented corruption and looting of the people’s commonwealth.

“There is no way Fayose can convince the people of Ekiti State that he is fit and proper to rule Ekiti again because he has ridiculed Ekiti people before the world and the people are now regretting that Fayose is the governor of Ekiti State.

“By virtue of his conduct, Fayose has shown that his indictment by the EFCC in 2006 was justified and there is no way he can convince any right-thinking person that he has not looted Ekiti funds.

“During his two-year misrule, he has shown that he is the root of poverty, untimely deaths and disregard for the rule of law prevailing in Ekiti State”.