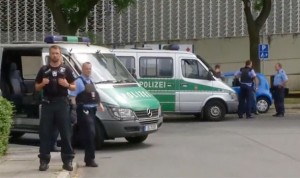 Horror attacks in Germany haven’t ceased as reports have emerged of a doctor being shot in a Berlin hospital.

This is the fifth attack in Germany in 8 days.

The attack comes less than 48 hours after a Syrian refugee blew himself up, injuring 15 in the process at a music festival in the town.

The shooter shot himself after shooting the doctor inside the Charite University Hospital in the southwest of Berlin.

The shooter is said to be a former patient of the doctor.

Berlin Police said the doctor was critically injured and was taken to intensive care before he later passed away.

Eyewitnesses said about 20 police, ambulance and fire vehicles were called to the hospital as they blocked the entrance.

Police say there is currently no evidence of a terrorist background.