A dog named Max became a hero after rescuing a 14 year-old boy who got lost during an expedition in Mexico.

The boy was said to have spent 44 hours in the wilderness after being lost.

Juan Heriberto Trevino who was on a summer camp trip with his friends last Sunday got separated from his group while he was searching for firewood.

During the search he slipped down a ravine and couldn’t find his way back to where he camped.

Fortunately for him, Max followed him down the ravine and stayed by his side for the next 2 days.

Juan later took shelter under a tree after walking for several hours. He then pulled Max close to him.

The dog spent the night lying on the boy’s legs, keeping him warm.

The next day, Max found a puddle for both of them to drink from, staving off thirst.

Max stayed by Juan’s side during the whole ordeal.

Juan was later found Tuesday morning by two rescuers on horseback. One said: “When he saw us, he ran up and hugged us – he had been so afraid.” 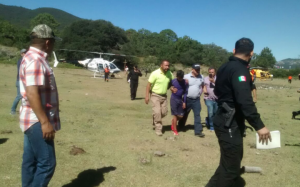 He added: “In that part of the mountain, it is very easy to get lost. In addition, it’s very cold at night, as it is very high. The child was lucky to find the dog.”

Juan’s family were so grateful to Max they wanted to adopt him but subsequently discovered he already had a home.