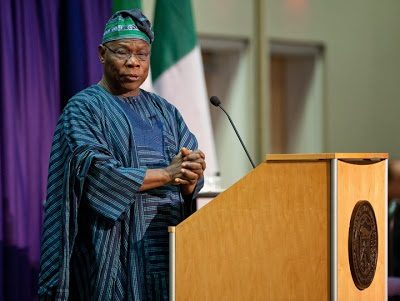 Former President Olusegun Obasanjo has asserted that all political actors and leaders are prone to scandals.

He made the assertion yesterday while responding to a question by a participant at the Murtala Mohammed Foundation Summit in Lagos that scandals in politics was widespread.

The former Nigerian leader was among a panel of discussants with former Malawian President, Dr. Joyce Banda and Aisha Mohammed-Oyebode, Chief Executive Officer of the Foundation and widow of the late Military Head of State, Gen. Murtala Mohammed.

“Scandal is not just for ‎women in politics; all leaders are scandalized”, he said. “If you don’t want to be scandalized, don’t go into politics”.

Mr. Obasanjo noted that anyone who has been following the news for political events in the United States of America, which prides itself as the world’s most advanced democracy, would have noticed the mudslinging between the camps of the Republican and Democratic presidential candidates – Donald Trump and Hillary Clinton respectively – all in a bid to outdo each other in the race for the White House.

But the former Nigerian leader, who himself, is not new to scandals in and out of public office, had this word of encouragement: “What I believe is important is your conscience. Ensure that whatever you do is what you can defend with your conscience”.

Earlier in her address titled “Women in Solidarity: a new paradigm for inclusion”, Banda called for partnership among African women even as she reiterated the need for them to have the support of their male counterparts to lead the continent.