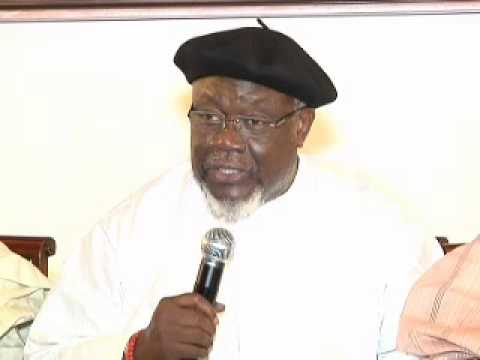 Mr. Ikimi further said Oshiomhole emerged winner at the polls by a wide margin not because of his merit or popularity but because he (Ikimi) and the Peoples Democratic Party’s candidate in the forthcoming governorship election, Pastor Osagie Ize-Iyamu, took the governor to then President Jonathan to demand a level-playing field.

The former minister spoke in Benin City, the state capital, at the take-off of Ize-Iyamu’s governorship campaign on Monday.

Ikimi said elections were won in the state with personalities, like Chief Gabriel Igbinedion and Chief Tony Anenih.

The PDP chieftain, however, pleaded with President Muhammadu Buhari to ensure there was a level playing field for all the contestants during the September 10 election as a payback to him for leading the formation of the All Progressives Congress (APC).

He said: “Pastor Ize-Iyamu brought Oshiomhole to me. I never knew him before. I was told he was a former Labour leader. I was persuaded to accept him and we took him round the 192 wards.

“In his first four years, he betrayed us. We wanted to drop him but he knelt down to beg me. It was myself and Pastor Ize-Iyamu that took Oshiomhole to former President Jonathan to beg him to provide a level-playing field.

“Jonathan supported us. Oshiomhole won, not because he was brilliant but he has paid us in a bad coin”.

Speaking in the same vein, Senator Matthew Urhoghide said Oshiomhole paid those who supported him to power with ingratitude.

A former Minister of Information, Prof. Jerry Gana, said the verdict of the Federal High Court, Port Harcourt, which filtered in during the flag-off of Ize-Iyamu’s governorship campaign, was a good omen for the PDP.

In his remarks, Ize-Iyamu said the PDP would win the election and promised to restore the “lost glory” of the state.

The PDP candidate, who once was an ally of Gov. Oshiomhole, said the party was sincere and passionate about the development of the state.

Akwa Ibom State Governor, Emmanuel Udom, urged the electorate to vote for Ize-Iyamu, saying it was time for the people of Edo to return the state to the PDP family.

Gov. Udom assured that Ize-Iyamu would govern with transparency.

Secretary of the PDP Caretaker Committee, Senator Ben Obi said Ize-Iyamu had always ensured victory for whichever side he belonged since 1999.