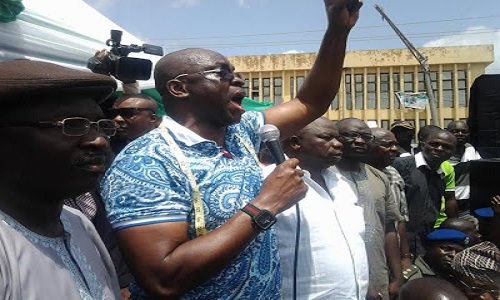 The Governor of Ekiti State, Mr. Ayodele Fayose, has rubbished a claim by the state chapter of the All Progressives Congress, APC, that he was using the state’s fund to pay his defence team in his legal case with the Economic and Financial Crimes Commission (EFCC).

The Ekiti APC spokesman, Mr. Taiwo Olatunbosun, had in a statement issued yesterday in Ado Ekiti, the state capital, claimed that a warrant for the payment of N22million, being the cost of chartered aircraft that flew Fayose’s lawyer, Mike Ozekhome (SAN) twice from Lagos to Akure, was issued and the money released almost immediately by the office of the Accountant General of the state.

The opposition party’s spokesman in the state pointed out that the N22m was excluding the legal fees, which he further alleged, was paid to Mr. Ozekhome by the state government.

Reacting to the allegations in a statement last night by his Special Assistant on Public Communications and New Media, Lere Olayinka, the governor noted that “the allegation is a continuation of the APC’s life of disparaging eminent Nigerians that are not dancing to the destructive tunes of the party”.

He also challenged the APC in the state to publish their facts.

“The APC beer parlour jesters in Ekiti must have taken their lamentation over their loss of power to a psychotic level that anything will make meaning to them no matter unreasonable”, he said.

Mr. Olayinka maintained that the Fayose-led administration in the state did not, and will not spend any N22 million on the eminent lawyer because the present government is not being ran like the immediate past APC government of Dr. Kayode Fayemi that plunged the state into debt.

“The reality is that, those evil men in the APC that won’t even mind to malign God are seeing Chief Ozekhome as an uncompromising lawyer, who will not blow hot and cold at the same time. They see Chief Ozekhome as a lawyer that will not join them to defend their regime of impunity and for that they have opted to malign him as they have done to others.

“While we are confident that Chief Ozekhome will take them one legally, we make bold to say that at no time was the eminent lawyer travelled to Ekiti by air, not to talk chattered flight”, the statement asserted.