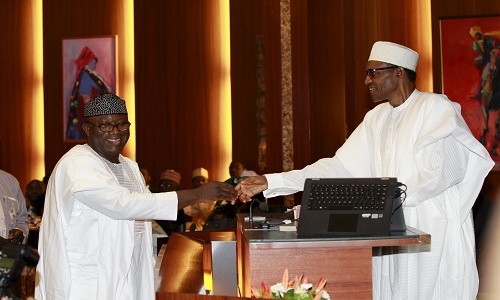 The Ekiti State chapter of the Peoples Democratic Party (PDP) has told President Muhammadu Buhari to refund the N1.5billion state funds allegedly contributed to his campaign by immediate past governor of the state, Dr. Kayode Fayemi.

The party, which was reacting to the probing of the source of Governor Ayodele Fayose’s campaign funds by the Economic and Financial Crimes Commission, EFCC, reminded the president of the age-long saying that he who must come to equity, must come with clean hands.

It said “equity and justice demand that Buhari should return what he got from Ekiti State treasury through Fayemi, if he is running after those who allegedly got money from the Office of the National Security Adviser (ONSA)”.

According to a statement issued by the Ekiti PDP spokesman, Jackson Adebayo in Ado-Ekiti on Monday, if President Buhari refunds the N1.5billion, it will go a long way in cushioning the effects of the dwindling economic fortune of the State, especially payment of workers’ salary.

The PDP alleged that Fayemi, who is now Minister of Solid Minerals, transferred N1.5 billion from his account in a bank located along Liberation Square, Accra, Ghana to the APC Presidential Campaign Fund account “in order to place him in a vantage position for ministerial appointment should Buhari wins the February 14 Presidential election”.

It added that true to Fayemi’s expectation, he was appointed minister.

“N1.5 billion is a lot of money and Ekiti State government will only need to add some millions to be able to pay one month salary if Buhari returns the money.

“The APC government of Fayemi left office with August and September 2014 salaries of workers unpaid but the same Fayemi could donate N1.5bn to Buhari’s campaign just because he wanted to be minister. Where then is the morality in Buhari’s anti-corruption posture when he was funded with stolen fund?

“The President must therefore return the N1.5 billion stolen from Ekiti State that was used to fund his election”, the PDP said.

While reiterating the party’s support for the fight against corruption, Mr. Adebayo said “President Buhari must first remove the logs in his eyes before his attempt to remove the toothpicks in other people’s eyes can be taken seriously and the first step he must take is to return the N1.5 billion he got from Fayemi to fund his election”.