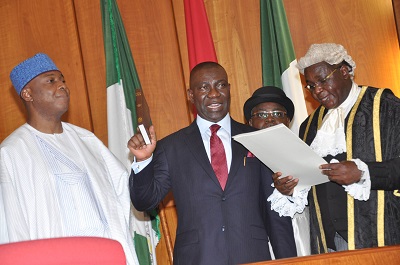 The national caretaker committee of the Peoples Democratic Party, PDP, has condemned the All Progressives Congress (APC)-led federal government over the trial of the deputy Senate president‎, Ike Ekweremadu, for alleged forgery of the Senate Standing Rules.

The Ahmed Makarfi-led caretaker committee described the trial of the deputy Senate president as inexcusable in a democracy, explaining that the ruling party had no constitutional or moral grounds to b‎e displeased with Ekweremadu’s emergence as deputy president of the Senate.

The National Chairman of the APC, Chief John Odigie-Oyegun was quoted to have said in a recent interview that the emergence of Ekweremadu as deputy Senate president in an APC-dominated National Assembly unsettled the party, adding that the governing party found it very difficult to accept his emergence.

While labeling the criminal charges against the principal officers of the Senate as “phantom and shenanigan”, the PDP caretaker committee cautioned the federal government against interfering with the affairs of the National Assembly, which it said is a separate arm ‎of government created by the constitution.

“We, however, want to make it clear that the APC has no constitutional or moral grounds to be displeased with Ekweremadu’s emergence or to go this ridiculous length to harass, intimidate, embarrass, and malign him and the institution of the Senate on account of a position to which his colleagues, cutting across party lines, elected him in a transparent and televised election in line with Section 50 of the 1999 Constitution as amended”, a statement by the spokesman ‎of the committee, Prince Dayo Adeyeye, said on Tuesday.

“The APC as a party, and through its chieftains, including President Muhammadu Buhari before his election, had variously and robustly ‎defended the constitutionality and imperativeness of bi-partisan ‎legislative leadership during the defection of the former Speaker of the House of Representatives, Rt. Hon. Aminu Tambuwal, to their fold while in ‎opposition without relinquishing his position.

“We, therefore, invite the APC-led federal government to tell the world ‎why bi-partisan leadership in the legislature was good in the instances ‎of Tambuwal as well as the Benue and Plateau assemblies, but an ‎abomination in the case of Senator Ekweremadu.

“We consider APC’s stance on Ekweremadu and his continued persecution on ‎this account as the height of duplicity, intolerance, unwarranted and inexcusable executive excesses in a democracy.

“More so, unlike APC’s rancorous opposition in parliament in the recent past, the PDP lawmakers, including Senator Ekweremadu, have provided a very responsible opposition, supporting the government and overlooking ‎its serial fumbles. Ekweremadu is not APC’s stumbling block”, the statement added.