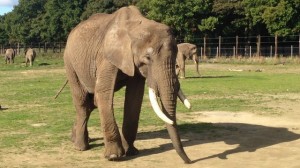 A young girl lost her life in a strange accident at a zoo in Morocco.

A rock was said to have hit her head after being thrown by an elephant in an enclosure.

Sadly, the 7 year-old was in front of the enclosure when the elephant used its trunk to toss the rock towards her.

She was taken to a nearby hospital and later pronounced dead.

A statement from Rabat Zoo confirmed the incident. It said: “In these painful circumstances, zoo staff express their condolences to the family of the deceased and joins in their pain.”

The zoo defended its safety procedures saying the enclosure meets “international standards required”, and that similar accidents have occurred at attractions around the world, including Disney World Orlando and Cincinnati Zoo in the US.