7 year old Chibuike Miracle Oramalu (pictured) has been in custody at State CID, Police Headquarters, Enugu, since 30th May 2016 after he accidentally shot a 12-year-old boy to death. However, the Enugu State Police Command yesterday July 12, issued a statement on the alleged detention claiming that they took the step in order to protect him from the family of the deceased. 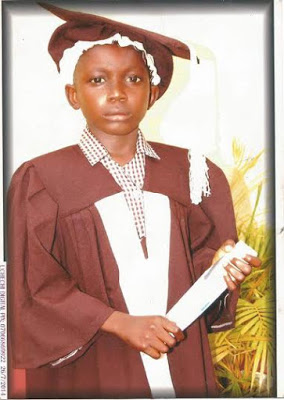 On the 29th May 2016, while the boy’s mother Mrs. Nwakaego Oramalu, was in church, the son of her employer/landlord where she works as cleaner and housekeeper asked Chibuike and his 10 year old brother Ifeanyi Oramalu, to tidy up the landlord’s room. While the two children were cleaning the room, Chibuike saw a gun by the bed side, he carried it and showed it to Ifeanyi who told him to return the gun where he saw it. While trying to keep the gun back he mistakenly press the trigger and a shot went of and shattered the window glass, went into the next compound and killed a 12 year old.

According to Barrister Emeka Ugwuonye, the Police detained little Chibuike, a pry 2 pupil of Carmelite Nursery and pry school, Enugu and allegedly insisted that until when they see the landlord who is currently on the run, they will not release the little Chibuike
Below is the full statement issued by the Enugu State Police
“The attention of the Enugu state command of the Nigeria Police Force has been drawn to various publications in some sections of the media regarding the alleged detention of a 7 year old boy over a murder case under investigations at the command and hereby wish to present the fact as follows for the guidance of the members of the public and to avoid further,being misinformed.
1)On 29th may,2016 at about 1110hrs,one Ifeanyichukwu of No 4 owerri Jikala street Independence Layout Enugu Reported at New Haven Police Station Enugu that at about 1030hrs,one Oluebube John aged about 12 years who was playing with other children was shot by one chibuike Oramalu aged 7 years through the window of the house of one Edwin Oforma of No 57 Lobito Crescent Independence Layout,Enugu.
2)That enquiry conducted revealed urgently that Chibuike Oramalu is living with the mother one Nwakaego Oramalu in the house of the alleged owner of the English made double barrel gun which was already loaded with cartridge cocked and kept in the room of the said owner of the house

3)That it was discovered that both the son of the owner of the gun/house one chukwuma Anu offorma had allegedly asked Chibuike Oramalu and brother one Ifeanyi Oramalu to clean the fathers room for him.
4)That while the duo of ifeanyi and chibuike were allegedly cleaning the room,chibuike stormed into the already cocked double barrel gun where he also touched the trigger of the said double barrel gun and it allegedly fired and pierced through the window of the house to a nearby compound and allegedly hit one Oluebube John of about 12 years old.
5)That following the development,operatives of the Enugu state police command moved in to the scene where they saw the victim already lying in his pool of blood and consequently took him to Enugu state University Teaching Hospital,Parklane,Enugu where he was confirmed dead by Doctors on duty hence his body was deposited at the colliery Hospital Mortuary,Enugu.
6)That this development angered members and families of the deceased who were on the move to unleash vengeance on Chibuike Oramalu and cause destruction on the house of the said owner of the double barrel gun.
7)That the state command of the Nigeria Police Force in its bid to save the life of little chibuike oramalu as well as to forestall breakdown of law and order,moved chibuike away from the scene to the police headquarters on the ground of protective custody while security was intensified within and around the scene.
8)It is however pertinent to point out that the state command is not unaware of the existence of rule of law,human rights as well as childs rights Act as to have exposed the 7 year old chibuike oramalu to danger as published in some sections of the media.
However,while efforts are intensified with a view to unraveling the circumstance surrounding the unfortunate incident and bring the owner of the said gun to book,the command wish to use this platform to join other members of the public to commiserate with the family of the deceased OLuebube John.