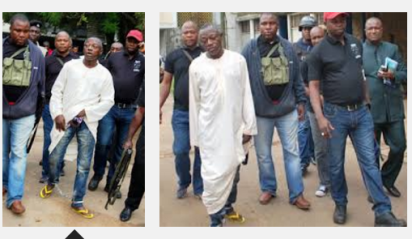 Former Oyo State National Union of Road Transport Workers Chairman, Alhaji Lamidi Mukaila, popularly called ‘Auxiliary’ and four other accused persons have been sentenced to six years imprisonment by an Oyo State High Court for conspiracy in the death of some individuals, including a medical student, on March 2, 2014.

The convicted criminals, Mukaila, Saheed Kareem, Abu Kareem, Kazeem Kayode and Taiwo Tijani had been standing trial for the mayhem at Iwo Road interchange, Ibadan. Among the victims was one Adekunle Oladipupo, a 500 level medical student of the Ahmadu Bello University (ABU), Zaria.

Justice Eni Esan who delivered the judgement said the accused persons were charged with a three-count charge of conspiracy, murder and attempted murder.

The judge noted that the prosecution witness, one Akeem Agbaje in his statement told the court he was beside Adekunle Adedipupo on the day when the accused persons with others at large stormed the motor park in a Peugeot 604 belonging to Alhaji Mukaila and two other cars shooting sporadically.

The witness went further that it was during the shooting that bullet hit the deceased who died immediately, lamenting that he too, sustained serious injuries.

Justice Esan also said during cross examination, the PW 1 (Akeem Agbaje) told the court that although the incident occurred around 9:45pm, he was able to identify the accused persons with the help of head light of the cars that lit up the place.

“The court hereby discharged the accused persons on the murder charge.” Continuing, the court ruled that since the first accused person admitted that he owned guns and the accused were caught in a car with rounds of bullet, they were guilty of conspiracy and sentenced to six years imprisonment each.

However, counsel to the accused persons, Mr. Olalekan Ojo, confirmed that his clients would appeal the judgment, contending that since the court had acquitted and discharged them of murder and attempted murder, the conspiracy for which they were convicted does not have a solid ground.