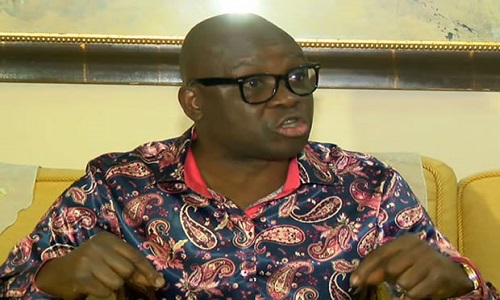 Governor Ayodele Fayose of Ekiti State has denied receiving N4.7 billion allocation for the month of June as alleged by the state chapter of All Progressives Congress (APC).

The APC in a statement issued on Sunday by its spokesman, Taiwo Olatunbosun, said Fayose no longer has an excuse not to pay workers’ salaries and pensioners’ entitlements with the “N4.7 billion federal allocation” to the state.

Mr. Olatunbosun stressed that the allocation was enough to pay four out of the six months salaries owed workers in the state.

Reacting to the claim, the governor in a broadcast on the state radio and television on Monday, pointed out that his government received a net allocation of N2.5 billion from the Federation Account after N900 million was deducted at source to service the state debts.

Fayose, who accused the opposition of trying to make a political gain out of the state allocation, added that the 16 local governments in the state received N2.01 billion.

He also accused the APC of plunging the state into debts, saying Ekiti is paying dearly for the party’s indiscriminate borrowing while it was in power.

Fayose said: “Those peddling unfounded rumours were given their own opportunity to lead the state and they left the state in huge debts. Their failed, white elephant projects litter the state.

“The uncompleted civic centre and the new Governor’s Office along NTA Road where they only scraped the ground were few examples of their failed projects in the state. The pavilion was uncompleted and left in a state of disrepair.

“I have always revealed whatever comes to the state as allocations. There is nothing to hide as even the federal authorities do publish the allocations in daily newspapers.

“Their mischief has failed and by God’s grace they cannot defeat me. Let them continue to delude themselves, Ekiti people are no fools, they know the truth and those who stand for the truth”.

The governor also used the occasion to announce that the state government’s social security scheme, where 1,000 people would be paid N5,000 monthly, would soon take off.

Mr. Fayose gave the assurance that rather than disburse the money through intermediaries, it would be paid directly into people’s accounts.