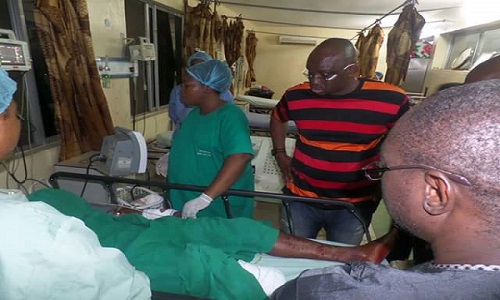 The Governor of Ekiti State, Ayodele Fayose, has declared three days of prayers for the repose of the souls of eight students of the Ekiti State University, Ado-Ekiti, who died on Monday in ghastly road accident.

Describing the accident as unfortunate and one death too many, the governor urged people of the state to reflect and pray for God’s mercy as well as his intervention in consoling the families and friends of the victims.

“I sympathize with them (families and friends of the victims). It is unfortunate; it is not a good news, it is one too many”, said a distraught Governor Fayose. “We’re saddened but we have to take solace in God”.

It was gathered that the victims, final year engineering students of EKSU, were returning from an outing when their Lexus car rammed into a bus belonging to a private school in front of the university.

Fayose, who was at the State University Teaching Hospital (EKSUTH) to get a first-hand account of what happened and ensure that those who survived the accident receive the best medical treatment available, said the prayers was also meant to forestall a recurrence of such terrible incidences.

The governor expressed regrets that the accident claimed the lives of eight students even as some others are in the intensive care unit battling to stay alive.

“Reckless driving and over-speeding has cost us eight lives and some others in ICU. I just want to commit them into the hands of God because there is nothing to say for now rather than to pray that God should intervene and console the families and the people of Ekiti”, he said.