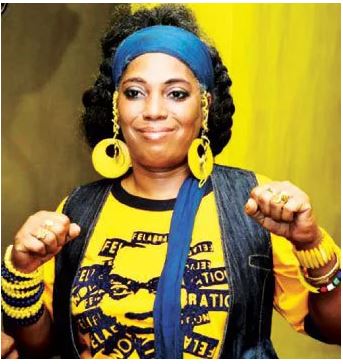 The first daughter of late Afrobeat legend, Fela Anikulapo-Kuti, Yeni Kuti has made a shocking revelation. The dancer who just found a new love revealed that she has stopped smoking. Though hard to believe, the mother-of-one revealed that quit smoking three years ago so as to stay alive for her only daughter, Rolari. Yeni said: “Before my daughter went into the university, I used to smoke and suffer chest pains. I was like ‘if I continue smoking I may die before my daughter graduates’.
“That was the inspiration I needed to stop smoking because for years, I had been telling myself that I would stop smoking on the first day of January, but by January 4 I was still smoking. “But this time, I didn’t wait for January 3 or 4. I simply told myself that if I continued smoking, I would die and never see my daughter graduate. And that was just too important for me, so I just stopped. I have stopped smoking for three years. The fear of not being able to educate my child gave me that inspiration. I was like, who will educate this girl if I die?”

Her only child and daughter Rolari is now a graduate and also married. When asked if she misses Rolari, Yeni said: “I miss my daughter but we talk regularly. I can’t call her in her husband’s house the way I used to call her before. I am a very happy mother because my daughter is married and settled, and they both love each other.”

Having a father like her late father, Fela who flaunted smoking weed till he dropped dead and was even buried with wraps of weeds, this is great news. Yeni used to dance for her brother, scion of Fela dynasty, Femi Kuti before she stopped. She is one of the anchors of Your Views on TVC alongside two other ladies. Yeni got engaged to her longtime partner, Theo Lawson, during her 55 birthday celebration on May 24. Her first marriage to late Femi Segun produced Rolari but it crashed many years before Segun died in 2014.