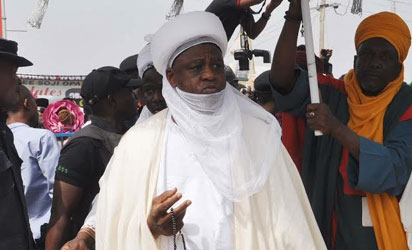 The Sultan of Sokoto and President-General of the Nigerian Supreme Council for Islamic Affairs, NSCIA, Alhaji Sa’ad Abubakar III, has warned Muslims in the country against taking laws into their hands.

This is just as he disclosed that the only time Muslims should “fight”, is when their religious rights are being trampled upon.

It would be recalled that some yet-to-be identified Muslim youths attacked St. Philip’s Catholic Parish, Baki Uki in Niger State penultimate Friday, for allegedly holding mass on “their day of prayer (Juma’at)”, while a female trader – Bridget Agbahime – was killed over a month ago by Muslim fundamentalists for allegedly preventing a man from performing ablution in front of her shop at the Kofar Wambai market in Kano and just recently, a female preacher, Deaconess Eunice Olawale, was murdered in Kubwa, Abuja, while she was preaching on the street by yet-to-be identified persons.

Speaking in Ilorin, Kwara State, at the opening of a National Conference of Islamic preachers under the umbrella of Da’wah Co-ordination Council of Nigeria (DCCN) at the weekend, Sultan Abubakar also warned Muslim clerics against hate sermons and urged them to “not force anybody to join Islam”.

He said, “When somebody or a group or some other nations decide to stop us from performing our religious obligations”.

“We must never take laws into our hands. We must not be law officers. We do not do that in Islam,” he said.

“We do not force anybody to join Islam. There is no compulsion in Islam. Our good deeds, good actions and good interactions as Muslims will give that very bright light to everybody what Islam is and that is what brings people to join us.

“Those who do not want to come as Muslims are free to stay with us and continue working with us to make this country a much better place.

“Whoever wants to fight you, do not fight him; leave him alone. Be very patient. The only thing that will make me to act or ask you to act is only when somebody or a group or some other nations decide to stop us from performing our religious obligations. That is the only way we can fight somebody.

“But if I am allowed to pursue my religious obligations, say my prayers and pay my zakat and so many other things, I have no problem with anybody. To you, your religion and to me, my religion”.