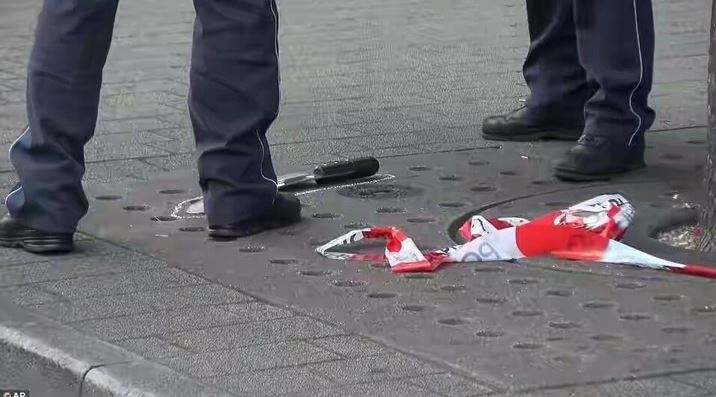 Syrian refugee, 21, hacks PREGNANT woman to death with machete and injures two others before hero BMW driver runs him over in yet another attack in Germany

Syrian refugee, aged 21, went on a machete rampage in the city Reutlingen, Germany near to a doner kebab stand
He killed one woman and injured a man and another woman in the attack before being detained by the police
The motive for the attack is unclear but it has been reported he had a dispute with the woman before he killed her A Syrian refugee wielding a machete has killed a pregnant woman and injured a man and another woman in Germany before being arrested by police after he was run over by a man driving a BMW. The attack happened in the south western city of Reutlingen near a doner kebab stand in a bus station at Listplatz Square in what has been described as a ‘crime of passion’.

German media have been reporting that the motive for the attack in the city south of Stuttgart was unclear but the attacker and the 45-year-old Polish victim both worked at the same snack bar. Armed police officers can be seen pinning him down to the ground before binding his hands behind his back.

Meanwhile, footage filmed by passers-by also showed the bearded attacker in the moments following the rampage running around in the street while people scream ‘oh my god’.

He also banged on the windows of a Citroen car in which a 51-year-old woman suffered cuts to her arms and a 41-year-old man went into shock.

The attacker also injured a 23-year-old man by slashing his face.

It is believed a man passing the incident in a BMW car ran over the man, knocking him to the ground, before he was detained by police.