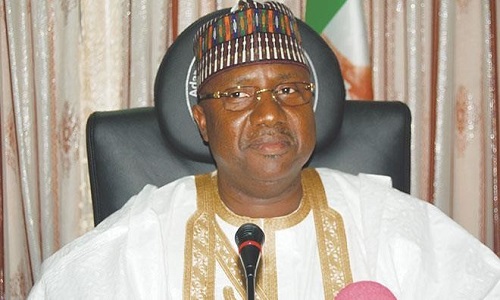 Governor Muhammadu Jibrilla Bindow of Adamawa State has exonerated governors of blame over inability to pay workers salary in many states of the federation.

He stated this yesterday when he received traditional rulers, who paid him sallah homage at government house in Yola, the state capital.

Bindow said rather than blame governors for the problem of non-payment of salaries, the dwindling revenue from the federation account should be held responsible.

While noting that Adamawa was one of the states that is steady in paying workers salary, the governor said that workers in the state needed to appreciate the government for its effort in paying their salaries as at when due.

He also urged traditional rulers to enlighten the people on peaceful coexistence and the need to return to farming.

Gov. Bindow disclosed that Adamawa was one of the seven states selected for the Central Bank of Nigeria’s (CBN) Anchor Borrower’s Rice production programme.

He assured the traditional rulers of government’s commitment to provide fertilizer to farmers.

In their separate responses, the Lamido of Adamawa, Alhaji Barkindo Mustafa and Emir of Mubi, Alhaji Abubakar Isa, lauded the governor for his effort to transform the state and assured him of their continued support.