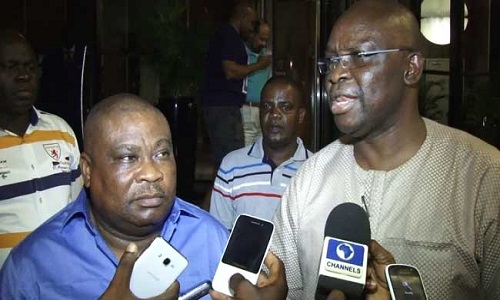 A former Secretary of the Peoples Democratic Party (PDP) in Ekiti State, Dr. Tayo Aluko, is not done spilling the beans on alleged shady dealings by Governor Ayodele Fayose and former Minister of State for Defence, Senator Musiliu Obanikoro, in the build-up to the June 21, 2014 governorship election in the state.

According to the Ekiti State governorship poll fraud whistleblower, Zenith Bank only provided N200million to Fayose after he had been declared winner of the election by the Independent National Electoral Commission, INEC.

Aluko made this allegation during a live interview programme on ADABA 88.9 FM Akure, on Tuesday.

The former PDP scribe, who claimed that Fayose did not have up to N10 million in his personal account before contesting the governorship poll in 2014, further alleged that the governor’s primary election was sponsored by Transformation Ambassadors of Nigeria (TAN) and the Nigeria National Petroleum Corporation (NNPC).

These claims could not be independently verified before this report was published.

He further claimed that it was after Fayose had won the primary election that cash from the Office of the National Security Adviser (ONSA) and oil contractors was deployed to fund the election campaign proper.

He insisted that it was after Fayose had been declared winner of the guber poll that Zenith Bank and other corporate organizations came with business proposals, adding that the governor’s claim that the bank was the major financier of his campaign was a “blatant lie”.

Speaking on the purported feud between Fayose and Obanikoro on the arms cash, Aluko revealed during the interview that a crisis of confidence broke out between the duo after it was discovered that there was a shortfall of N80 million in the money ferried by plane to Akure, the Ondo State capital for the governorship election.

He said: “The Presidency gave us security and money, the money was sent from a Diamond Bank branch through an account run by Sylvan MacNamara, a company owned by Obanikoro.

“He (Fayose) chose his man, Abiodun Agbele, to keep the money in a Zenith Bank account and the money was lodged at Zenith Bank, Alagbaka Branch in Akure. The transaction was not recorded and it got to a stage when it was discovered that the money was short by N80 million.

“This caused a crisis between Fayose and Obanikoro who brought money thrice from Abuja. He (Obanikoro) brought other things apart from money which I won’t disclose now and it was from it that N1 billion was released to INEC officials to manipulate Ekiti and Osun polls.

“Fayose was threatening former President Goodluck Jonathan that he (Fayose) must deliver so that Jonathan will win in Southwest. All the PDP elders were kept out of picture on the transactions and cash and some of the cash deployed did not get to their destinations.

“The cash carried on the plane was not entered into the plane manifest, the N2.1 billion was delivered to a bank at 4:30am in Ekiti. The N2.3 billion remaining from the total cash received for the election was used to buy house in Abuja and the house belongs to Fayose.

“Fayose purchased five houses in Victoria Island and Banana Island. The property in Dubai was purchased by a fellow who is known as Bisi in Ekiti but is known as Femi abroad. Questions are being asked on the N3 billion used to purchase the Dubai property but I strongly believe that we will recover our money”.