Former Governor of Oyo State, Victor Omololu Olunloyo, and father of US-trained journalist, Kemi Olunloyo, has reacted to reports making the rounds that he disowned his daughter. 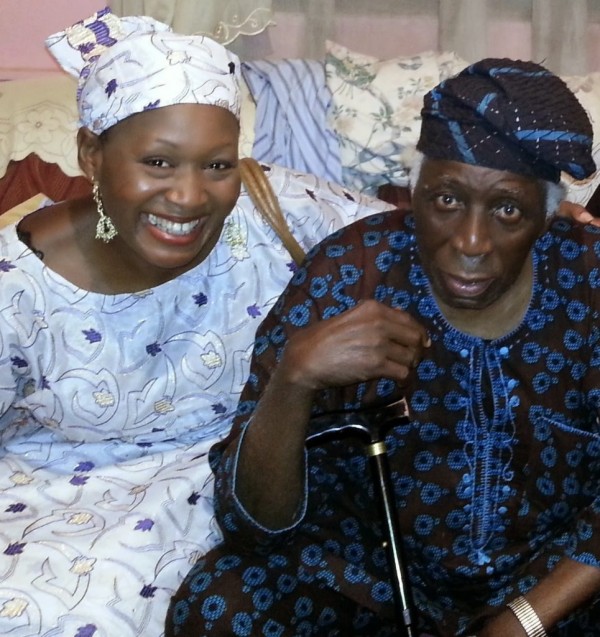 Earlier today, a report in an online medium had it that the former governor had disowned his daughter, saying she is a disgrace to the entire family and as such, everyone should ignore and disregard her rants.

Her father has however denied granting any interview of such.
The ex-governor, in a statement on his Facebook page via his PA, wrote: “TO ALL NIGERIANS ON SOCIAL MEDIA.

“I have NOT released any statement of any kind about my daughter Kemi Omololu-Olunloyo denouncing her social media posts. There is a fake statement floating around websites which I learned about.

“Some of the contents are absolutely false. She has never been to Ireland nor landed in jail anywhere where the late Okunade Sijuwade had to bail her out.

“There is an Aboderin character that I have learned about whom I’m told is impersonating her on Instagram and other social media platforms attacking our family.
“A similar letter purported to have been written to Aboderin by me is also false. If anyone paid attention to my 2013 Punch newspapers interview, I commended Kemi’s views on social media telling the reporter Atoyebi “Kemi’s views are her views, you can’t change her.

“I am not aware of Kemi’s decision to quit reporting Nigerian news until now so she is NOT responding to my fake statement floating out there.

“Please disregard the endless impersonation and degrading of the Olunloyo family. I am not a fan of social media and this Facebook page was opened because of the rumors that circulated the internet during my 2010 illness saying that I was DEAD.

“This page serves the purpose of ending such rumours. Once again, I did NOT send out any statement regarding my daughter on social media. My number is public and any credible media outlet calls me for interviews not statements,” the former governor added in the statement.

The social critic, on her part, said her father will never write such about her.

Ms Olunloyo attributed the “defamation of character” to her feud with one Tokunbo Aboderin.

The Dublin/Ireland-based woman speaking in Yoruba, had rained curses on Ms Olunloyo for questioning and reporting investigative news about Nigerian celebrities.

The duo had been at loggerheads for quite some time and according to Ms Olunloyo, Aboderin, who is looking at gaining cheap popularity, is at it again, dragging her father into it.

Ms Olunloyo, responding to the allegations in a statement made available to DAILY POST, said, “So much obsession of my father with Tokunbo Aboderin. She has now sent a FAKE statement to the bloggers and Premium Times saying my father denounced my social media posts and that’s why I’m quitting Nigerian news.

“My dad has just released a statement which his PA just updated. I just got the call. Now a bunch of Nigerians are brainwashed. The same thing when Aboderin impersonated me on instagram attacking Toyin Aimakhu. Some bloggers did not notice that the page was an impersonation designed to attack me.

“And I don’t know or ever met this woman. She is reaching the end and at her breaking point. Abeg let the man rest Tokunbo. He doesn’t remember you! He was really pissed off when I talked to him on the phone,” she added.

Share
Facebook
Twitter
WhatsApp
Previous article27-Year-old Man Arraigned For Beating Up Father, Policemen
Next article8 Facts About the Man Who Knew Shagari Would Be Overthrown in 1983
- Advertisement -