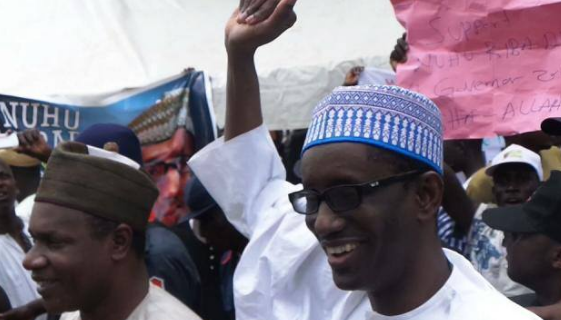 Nuhu Ribadu, the gubernatorial candidate of Peoples Democratic Party (PDP) in the last general election in Adamawa, says that he feels happy to be back in All Progressives Congress (APC).

Addressing party officials at the APC secretariat in Yola on Saturday, Mr. Ribadu, who spoke in Hausa, said he returned to the party with good intention to contribute positively to nation building at all levels.

“Thank God I am back, I feel happy to be back; I want to thank the party for the confidence reposed in us.

“The party requested us to return and we are back to work for Adamawa and Nigeria as a whole”, he said.

Mr. Ribadu, who explained that he was the first to concede defeat and congratulate Gov. Muhammadu Jibrilla of Adamawa during the last election, said he was committed to supporting and working with the governor in transforming the state.

Marcus Gundiri, the gubernatorial candidate of Social Democratic Party (SDP) in last election, who also returned to APC, said they accepted the call to return and work for the party which they contributed to ensure its creation.

Mr. Gundiri said they were not back to snatch or hijack the party as being speculated in some quarters.

He lauded the governor for making the party proud in the state, saying they would support him to succeed.

Mr. Gundiri urged APC members in the state to ensure that the party “cleared” the 21 chairmanship and 226 councillorship seats in coming Saturday local government election.

Earlier, the Acting State Chairman of APC in Adamawa, Ibrahim Bilal, who received them, described their return as “a day of joy”.

“This party is built with you, we called on you to return and you responded positively by going to your wards to register, visited your local government office and now you are in the state party office”, he said.

Mr. Bilal urged them to join hands and work with the state and federal APC led governments.

“You are special to us and you came at the right time when we needed your support for the coming Saturday local government election in Adamawa.

“I have briefed the governor Jibrilla of your coming and he is happy about it”, Mr. Bilal said. (NAN)