Nollywood producer and founder of Abuja International Film Festival, Fidelis Duker, is  enjoying the benefit of early marriage. He kept his vow  when he impregnated his wife,Temitope, at a very young age, and went ahead to marry her despite the odds. Today, the couple are better off for it, as their children are all grown up. Their first daughter will be 20 in another two years when they will be marking their twentieth wedding anniversary. In this encounter, Fidelis recounts some of the challenges he faced with his wife four years into marriage and how they were able to overcome the dark moments. On her part, Temitope says “marrying early was a blessing in disguise.” 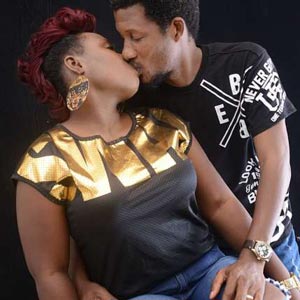 Ahead of the 20th wedding anniversary

Do we really have any plan to celebrate our 20th wedding anniversary? I think every year is a passing phase for us. I keep telling people, especially those in the movie industry where you we cases   of breaking of marriages after one or two years, that there is no perfect marriage. The first two years  after we got married, we had turbulent times. We met in 1995,   so between   then and now, we have had 21 years of  interacting with each other. And we have been married for more than 18 years now.

I think celebrating 20 years in marriage is a landmark . But the good thing about celebrating our 20th wedding anniversary will be that my eldest daughter will be 20 years as well, and she will be graduating from the university   then. My second daughter will   almost clock 19 years .   That would be our celebration. It’s not   about the number of years we have spent together.   We are   looking at even spending many more years together. I have always advised young couples that they should look beyond the glamour attached to marriage .   You should see your wife as your friend. That’s why if you ask my friends like Fred Amata, Zeb Ejiro and others, they keep saying my wife is my confidant. She’s always among my friends. As a matter of fact, she rarely has her own   friends.   She’s complaining now that I dragged her into my industry and she has now become friends of my friends as well. I think that’s what has kept us going. We have not kept anything from each other.

Growing up with her

I met her when she was very young. I grew up with her. And she’s complaining now that she never enjoyed her young age. That’s why she can’t wait to see her children finish their education so that those things she missed as a young girl, she wants to enjoy them now. She never had the opportunity to mingle with people as she went into marriage very early. The only friend my wife knew as a young girl then was me. It is very rare  to see somebody who married at a very young age to keep the marriage. Even her friends then were very scared when we first got married.

Fear of losing her

It wasn’t really the fear of losing her to another man that made me to   marry her at  that young age. Sincerely, while growing up, I made two vows, one, that I would never live outside the shores of the country no matter the opportunity and, second, any woman that got pregnant for me would automatically become my wife; even if she was not be ready to marry me, I would insist on marrying her.   So, we courted for about a year and a  half before she took in for me. Most of my friends who were not thinking of going into marriage then thought something was wrong with me.

When  I made the vow that any woman I would date and later get pregnant for me would become my wife,  I didn’t want to break  the vow, even though I was dating other girls. At that time, I was a bit comfortable as I had started making films. I felt the only thing left for me  was to get married. In fact, it was my car that I used on my wedding day. The economic situation was a bit conducive at that time in 1998. I was less than 30 years and you can imagine the kind of risk I took. But I was ready to go into marriage. I think I became matured very early. When my friends and colleagues in the industry were not ready to go into marriage, I took the bull by the horn. I only worked for somebody in a computer firm for six months in my entire life.

I think my dad   was  pretending, but my mum supported me. When I told her that my wife was pregnant for me, my mum asked me if I really wanted to marry her? I answered in the affirmative. Unfortunately, my mum died one or two years after our  marriage. For my dad, he was indifferent as he never really encouraged me. He wasn’t pleased with my decision even though he didn’t make it known to me.    Also, my father in-law never wanted the marriage because my wife is the only child of her parents. And she was still in school then. But like my mum, her mum also stood by her and ensured that she didn’t abort the baby.

Our first four years in marriage was one of the toughest part of my entire life. After our wedding, we lost our apartment, and my car was damaged beyond repairs by one of my friends who had an accident with it.   My office was the only thing I had left. But the irony of it is that nobody knew what my wife and I were passing.   I was practically living in my office with my wife. Early in the morning, we would take our bath before staff would resume duties, and after work, we would   stay back. Sometimes, we would   stay with my friend who was then living in Yaba. While we were passing through the hard times, my wife didn’t give up on me, neither did my friends know our predicaments. For eight months, we were homeless. Most of my friends will be shocked to hear this for the first time. Finally, we rented an apartment in Ijaye, on the outskirts of Lagos, and moved into the house. But all this while, my wife stood by me and never regretted her decision to marry me.

I have done a lot of things that hurt her. Apart from cheating on your wife, there are other things you can do to hurt her. Your wife might expect a gift from you on her birthday, and you forget to buy her a gift year after year. Definitely she will feel hurt. But one thing I like about hurting my wife   is that she’s quick to forgive and forget. She’s my best friend and my everything.

I married my friend — Temitope

I married my friend in the first place. Of course, early marriage comes with a lot of challenges. But the most important thing is to understand that you are in a relationship and you want it to work. And above all, you must love your partner. One of the disadvantages of early marriage is that, while your age mates are enjoying their time, you were already committed. You missed out that youthful exuberance. For example, at the time I got married, I had a lot of friends who were beginning to experience life. But those things I didn’t enjoy due to early marry, God has given me the   opportunity to enjoy them now. What I didn’t enjoy as a young girl, life has given back to me now. Ready for marriage I married very early when my age mates were not dreaming of going into marriage. I wasn’t ready at the time I got married. Though we had challenges along the line, we were able to overcome those challenges. On the   part of my parents, it was not easy for them to welcome the idea. That is why I ensured that my marriage is a success. Like I used to tell young girls, marriage means  commitment. You must love and respect your husband: know what makes him happy and the things he doesn’t like.

Other women in his life

At the time I met him, I wasn’t aware of any woman in his life. Maybe he was very careful to keep me in the dark about it. But I would have still married him if I knew he had a woman. And if he had been into drinking and smoking, nothing would have made me to marry him.

That would too personal. But I would like him to work on his temperament.