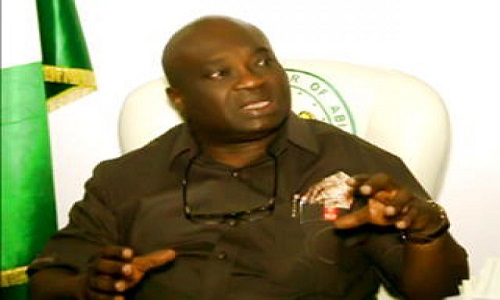 Governor Okezie Ikpeazu of Abia State yesterday asserted that nobody could remove him from office because his mandate is divine from God.

A federal high court sitting in Abuja last week declared Ikpeazu’s election null and void after it found him guilty of submitting false tax certificates to the Peoples Democratic Party (PDP) to contest the party’s primary in December 2014.

The court in a ruling delivered by Justice Okon Abang, held that Ikpeazu was not qualified, for that reason, to have been given the party’s ticket.

Justice Abang, thereafter, ordered the Independent National Electoral Commission (INEC) to issue a Certificate of Return to the plaintiff, Dr. Uche Ogah, who came second in the primary.

But the governor has appealed the judgment.

Speaking when he received a team from Nzuko Ohanaeze Ukwa/Ngwa on a solidarity visit to the Government House, Umuahia, yesterday, the governor said the people should not worry for him because the battle had been taken before God.

Ikpeazu said he was optimistic that God would fight the battle for him, pleading with them not to take up arms against anybody to avoid having casualties.

According to him, if it were to be a case of who has more money, his opponents would have taken over the state seat of power.

Governor Ikpeazu stressed that the office of governor of Abia was not up for sale to a moneybag.

He, therefore, urged the people to continue in their prayers for him, adding: “It is not a battle against me; it is a battle against the Office of the Governor, which I occupy by the grace of God.

“The coup d’état, which some desperate people from within and outside the state planned against the state and which failed to materialise five days ago, has become public knowledge. So, it will never succeed”.

Leader of the delegation, Elder Emma Adaelu, said they were with the governor to show their solidarity.