A yet-to-be identified child abductor, who confessed to being part of a 27-woman syndicate from Benin Republic, narrowly escaped being lynched yesterday when she was caught at Aka Road, Okokomaiko area of Lagos. 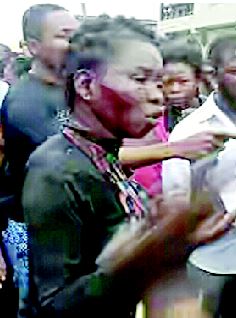 The lady, it was gathered, was usually seen around the area behaving like a lunatic, but became ‘sane’ when she was apprehended yesterday morning trying to abduct a child. Obviously scared for her life when she was caught in the act, the yet-to-be identified lady reportedly began to divulge information of her activities.

According to the suspect, “we were 27 women that came as a syndicate from Benin Republic.

Each woman was given five phones to contact their buyers once the targets, mainly little children, were found. We then discard the phone after transactions to avoid been traced. The abduction is for outright sale, not for a ransom.”

Vanguard gathered that the missing child count in Okokomaiko and its environs, in the last two months, is about seven. Few days ago, in the same Okokomaiko, another female child abductor was apprehended after she successfully kidnapped a child and attempted to kidnap the second child before she was noticed. Unfortunately, she could not produce the first child before she was whisked away by the police.

Lamenting, a resident in the area, Omowummi Ireti, said: “In the last one year, the trend of women kidnapping children has been on the increase.

“Fortunately, some of the women involved have been caught in recent times and they are always rescued from the mob and whisked away by the police. But the sad thing is that nothing is ever heard of the outcome again. “If the Nigerian Police is a serious outfit, one of such ‘arrests’ is enough lead to get to the root of this syndicate and crack it.”

When Vanguard visited the Okoko Division Police Station, the suspect was a shadow of herself as she has been beaten to stupor. She was vomiting and acting funny. Contacted, the Lagos State Police Command Public Relations Officer, SP Dolapo Badmos, said that the case had been transferred to state CID, Panti.