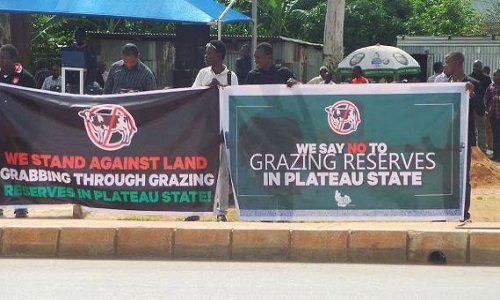 Governor Simon Lalong of Plateau State on Friday accused the immediate past governor, Senator Jonah Jang, of sponsoring street protests in the state against a non-existent plan to establish grazing reserves in the state.

Lalong made the accusation while speaking to State House correspondents after‎ meeting with President Muhammadu Buhari at the Presidential Villa, Abuja.

The governor, who noted that the protests against grazing reserves were futile, disclosed that relevant stakeholders had already agreed on ‎the establishment of cattle ranches in its place.

A 14-member committee set up by the Plateau Government on ranches, which includes traditional rulers, religious leaders and youth organizations, has already submitted its report adopting establishment of cattle ranches in the state.

According to Gov. Lalong, the ranches would be funded by the state and federal governments, while it would be open to all those who are interested in cattle rearing, not just for the Fulani herdsmen alone.

He said: “Well the protests were undertaken by few ethnic groups. We have done a lot of consultations from traditional rulers to religious leaders to youth organizations. They all accepted that we should adopt ranching in Plateau State. What they are protesting is grazing reserve but we are not talking about grazing reserves, what we are talking about is ranches. So those who attended the workshop knew what was done.

“This is the Presidency, let me say it and I’m going to publish it, the man who introduced it and is causing that confusion is Jonah Jang who incidentally was the person that introduced grazing reserves on the Plateau with a gazette in 2009. That is the gazette I am going to publish.

“If you said if we have to bring peace in Plateau State you have to introduce grazing reserves and grazing routes, why is he turning round again and instigating people against what is being done, and trying to give an impression that it is the President that is introducing it?

“It is not the President, it is an option to every state to key into the concept of grazing ranch. Its ranches, not grazing reserves…So, whatever you see in my state now is just a pocket of crisis or protest and not part of what the state has done. We’ve concluded our consultations and the state accepted that we should proceed with ranches which is very economical and that’d also help in curbing the insecurity in our state”.

The governor also disclosed that President Buhari had on the eve of his departure for London last month, approved N5 billion balance of bail-out fund for the state from which workers were now being paid their outstanding salaries.