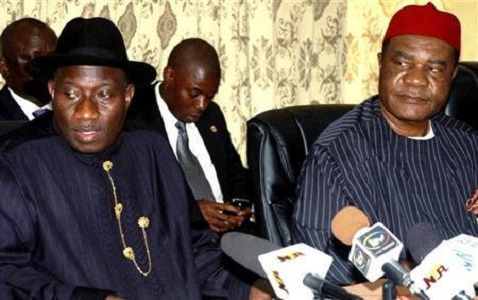 A former National Chairman of the Peoples Democratic Party, PDP, Prince Vincent Ogbulafor, has heaped the blame for the intractable crisis rocking the self-styled largest political party in Africa, at the doorstep of former President, Dr. Goodluck Jonathan.

Mr. Ogbulafor, who once boasted that the PDP would govern Nigeria for 60 years, said the former ruling party’s fall from Olympian heights was due to Jonathan’s refusal to respect the zoning formula of the party.

According to him, the party had a zoning pattern that had worked for it in the last 16 years and the best thing the former president should have done was to support a northern candidate in 2015.

“The person who caused the failure of PDP is Jonathan. PDP had internal democracy, a zoning pattern which worked for them for 16 years, and we agreed at a meeting that power would stay in the North for eight years before it returns to the South for another eight years”, Mr. Ogbulafor was quoted as saying in an explosive interview with VANGUARD.

SEE ALSO: Count Me Out Of 2019 Presidential Race – Jonathan

He continued: “You will not say [late President] Yar’Adua ruled for eight years; not even for four years, because he was sick. The best thing Jonathan would have done was to bring a Northerner and make him President and agree that when he finishes, power will come to the South and if it is him again, then he will contest.

“Doing that, the North will be happy; that was my feeling, and that was why I said that power is still in the North because we agreed eight years each for the two zones.

“So that is where the power tussle began and that was the downfall of PDP. When we refused to follow our guidelines, we derailed and there was no more internal democracy.

“When I said power would remain in the North, Jonathan did not like it and they made sure they unseated me. I left. That is when I knew that PDP was in for trouble, and that was when the diarrhea started.

“But it has happened: same Katsina State where Yar’Adua is from”.

Castigating the former president for having a record turnover of five chairmen in one year after he resigned as national chairman in May of 2010, Mr. Ogbulafor described the number as unheard of, saying it is the origin of the leadership crisis that has continued to bedevil the party to date.

“When Tony Anenih, Chairman, Board of Trustees resigned, when Muazu resigned, I commended their guts and I said these men want PDP to survive because they quietly exited.

“I advised then that the National Working Committee, NWC, of the party should resign because they had led PDP to failure, but they were more interested in the money they were sharing; they failed to heed my advice and that led PDP to where we are today”, he stated.

Making reference to the controversial chairmanship election of the Nigeria Governors’ Forum, NGF, in 2013, the ex-PDP chair said he advised then President Jonathan against tampering with the structure of the forum, but he refused.

“He went and tampered with the structure; that was when they said 16 is greater than 19. So some solid governors left the party: people like Amaechi, Saraki and Wammakko. Those are areas where you get a good number of voters. When they left the party, what do you expect? The party, indeed, collapsed”, Ogbulafor said.