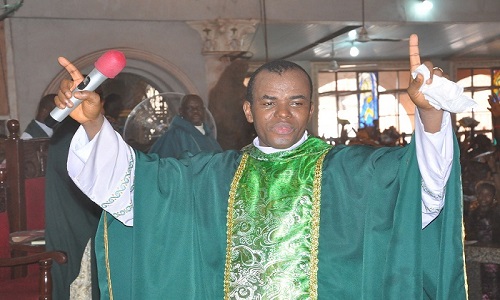 Controversial Catholic Priest, Reverend Father Ejike Mbaka yesterday, blamed the present economic woes on the failure of former President Goodluck Jonathan’s administration to save when there was oil boom.

According to him, ex-President Jonathan ran a wasteful government.

Mbaka, who is the Spiritual Director of Adoration Ministry, Enugu, in a statement by his media aide, Ike Maximus Ugwuoke, on activities to mark his 21 years of priestly ordination anniversary, accused the past government of spurning his prophecies that predicted tough times for the country if the culture of waste was not abandoned for a saving culture.

Mr. Ugwuoke, a lawyer, said: “When these prophesies come, it must not be what people think or want; people are entitled to their views; those reactions mean nothing; the important thing is that there is nothing he had prophesized which never came to pass; the ministry does not care how people feel about his prophesies”.

While reaffirming his calling as a “true prophet”, Fr. Mbaka recalled that he was the only person to have specifically predicted President Muhammadu Buhari’s victory in the 2015 general elections.

SEE: Interlopers Want To Drive A Wedge Between Me And Buhari -Mbaka

He pointed out that if it were in the olden days, “all those so-called men of God”, who castigated him for predicting a Buhari victory, “would have received the wrath of God immediately”.

“All of them should be ashamed of themselves now”, the statement said. “When you look at that prophesy on Jonathan, he gave it and it came to pass. Don’t forget that two months before that prophesy, Jonathan’s wife came to the adoration ground; that is to tell you that the prophesy came from God. If after such visit, he had the courage to reveal such prophesy against them, that tells you that it is much more than what people think”.

In apparent defence of the All Progressives Congress-led federal government’s handling of the economy, the Catholic Priest noted that even before Buhari took over on May 29, 2015, the economy was already showing signs of danger with the dollar on a steady rise against the naira.

“They had oil boom but never saved; they just wasted the opportunity. Even the suffering we are talking about was part of his prophesies”, Ugwuoke said, adding that during Mbaka’s adoration night on January 31, 2016, the Catholic Priest emphasized that a lot of hardship was underway and urged Nigerians to brace up for the hard times.

“What these suffering Nigerians are passing through are a process of change. I’m seeing a great future for Nigerians”, the media aide quoted Mr. Mbaka as saying.

He stressed that the cleric made it abundantly clear that there are so “many holes” which needed to be filled.

The media aide also denied claims that Mbaka fell out with Jonathan because the former president refused to allocate him an oil well.

“These are lies from the pit of hell”, Ugwuoke said. “These were used to water down the prophesy because people did not understand. It was even alleged that he received N5 million from Buhari; you begin to wonder what is N5 million to Mbaka. Is it the school fees he is paying for hundreds of people? This is all propaganda”.

“There was also these claims of meeting with APC chieftains before the election. He never held any such meeting; he never met Buhari before the election, there has never been any communication between them. What he has already is bigger than oil well; he is a musician and the ministry is being sustained with that”, he asserted.